"Shiloh" as Seen by a Private Soldier With Some Personal Reminiscences 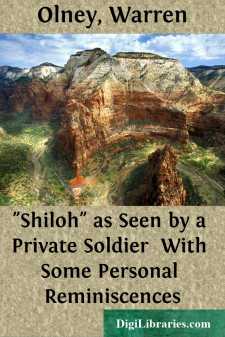 Very interesting descriptions of the great battles of the late war, written by prominent generals, have been lately published and widely read. It seems to me, however, that it is time for the private soldier to be heard from.

Of course, his field of vision is much more limited than that of his general. On the other hand, it is of vital importance to the latter to gloss over his mistakes, and draw attention only to those things which will add to his reputation. The private soldier has no such feeling. It is only to the officers of high rank engaged that a battle can bring glory and renown. To the army of common soldiers, who do the actual fighting, and risk mutilation and death, there is no reward except the consciousness of duty bravely performed. This was peculiarly the case in the late war, when more than a million of young men, the flower of our country, left their workshops and farms, their schools and colleges, to endure the hardships of the march and the camp, to risk health, limb and life, that their country might live, expecting nothing, hoping nothing for themselves, but all for their fatherland.

The first really great battle of the war was that of Pittsburg Landing, or Shiloh, and I shall not only attempt to give a general account of the battle, but also describe it from the point of view of a man in the ranks.

In respect to the general features of this desperate struggle between our own countrymen, my statements are derived from many reports and accounts carefully collated, and from many conversations with soldiers engaged, both from the Union and Confederate armies.

Who of us, having reached middle life, does not recall the exultation and enthusiasm aroused by the news of the capture of Fort Donelson? What a thrill of pride and patriotism was felt through all the loyal North! The soldiers of the great Northwest had attacked a citadel of the rebellion, and captured it, with sixteen thousand of its defenders.

At this time the Third Iowa Infantry was strung along the North Missouri Railroad, guarding bridges and doing other police work. Company B, which had the honor of having on its muster roll private Olney, was stationed at that time in the little town of Sturgeon, Missouri, where our principal occupation was to keep from freezing. We had then spent eight months campaigning in that border State—that is, if you call guarding railways and bridges, and attempting to overawe the disaffected, enlivened now and then by a brisk skirmish, campaigning. The Second Iowa had led the charge which captured the hostile breastworks at Donelson, and General Grant had telegraphed to General Halleck at St. Louis, who had repeated the message to the Governor of our State, that the Second Iowa was the bravest of the brave. The First Iowa had distinguished itself at Wilson's Creek, near Springfield, under General Lyon, while we—well, we hadn't done much of anything but to get a licking at Blue Mills. Therefore, when a message to move came, and we found ourselves on the way to join General Grant's army, we felt quite hilarious.

At St. Louis we were put on board the steamer "Iatan." Down the Mississippi, up the Ohio, up the Tennessee. As we proceeded up the Tennessee we were continually overtaking or being joined by other steamboats loaded with troops, until presently the river was alive with transports, carrying the army of the West right into the heart of the Confederacy....