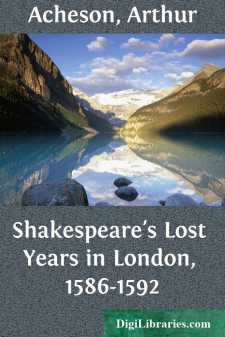 The most interesting and important fifteen years in the records of English dramatic literature are undoubtedly those between 1588 and 1603, within which limit all of Shakespeare's poems and the majority of his plays were written; yet no exhaustive English history, intelligently co-ordinating the social, literary, and political life of this period, has ever been written.

Froude, the keynote of whose historical work is contained in his assertion that "the Reformation was the root and source of the expansive force which has spread the Anglo-Saxon race over the globe," recognising a logical and dramatic climax for his argument in the defeat of the Spanish Armada in 1588, ends his history in that year; while Gardiner, whose historical interest was as much absorbed by the Puritan Revolution as was Froude's by the Reformation, finds a fitting beginning for his subject in the accession of James I. in 1603. Thus an historical hiatus is left which has never been exhaustively examined. To the resulting lack of a clearly defined historical background for those years on the part of Shakespearean critics and compilers—who are not as a rule also students of original sources of history—may be imputed much of the haziness which still exists regarding Shakespeare's relations to, and the manner in which his work may have been influenced by, the literary, social, and political life of this period.

The defeat of the Armada ended a long period of threatened danger for England, and the following fifteen years of Elizabeth's reign were passed in comparative security. The social life of London and the Court now took on, by comparison with the troubled past, an almost Augustan phase. During these years poetry and the drama flourished in England as they never did before, or since, in any such space of time. Within a few years of the beginning of this time Shakespeare became the principal writer for, and later on a sharer in, a company of players which, at about the same time, was chosen as the favourite Court company; a position which—under various titles—it continued to hold thereafterwards for over forty years.

When we compare the plays of Shakespeare with those of his contemporaries and immediate successors, it becomes evident that this dominant position was maintained by his company largely through the superior merit of his work while he lived, and by the prestige he had attained for it after he had passed away.

In the time of Elizabeth the stage was recognised as one of the principal vehicles for the reflection of opinion concerning matters of public interest; the players being, in Shakespeare's phrase, "the abstract and brief chronicles of the time." The fact that laws were passed and Orders in Council issued prohibiting the representation of matters of Church or State upon the stage, clearly implies the prevalence of such representations. It is altogether unlikely that the most popular dramatist of the day should, in this phase of his art, have remained an exception to the rule....