Sganarelle, or, the Self-Deceived Husband 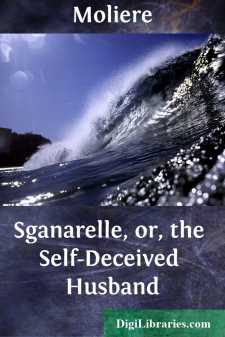 This play seems to have induced several English playwrights to imitate it. First, we have Sir William D'Avenant's The Playhouse to be Let, of which the date of the first performance is uncertain. According to the Biographia Britannica, it was "a very singular entertainment, composed of five acts, each being a distinct performance. The first act is introductory, shows the distress of the players in the time of vacation, that obliges them to let their house, which several offer to take for different purposes; amongst the rest a Frenchman, who had brought over a troop of his countrymen to act a farce. This is performed in the second act, which is a translation of Moliére's Sganarelle, or the Cuckold Conceit; all in broken French to make the people laugh. The third act is a sort of comic opera, under the title of The History of Sir Francis Drake. The fourth act is a serious opera, representing the cruelties of the Spaniards in Peru. The fifth act is a burlesque in Heroicks on the Amours of Cæsar and Cleopatra, has a great deal of wit and humour, and was often acted afterwards by itself."

With the exception of the first act, all the others, which are separate and distinct, but short dramatic pieces, were written in the time of Oliver Cromwell, and two of them at least were performed at the Cockpit, when Sir William D'Avenant had obtained permission to present his entertainments of music and perspective in scenes.

The second imitation of Sganarelle is "Tom Essence, or the Modish Wife, a Comedy as it is acted at the Duke's Theatre, 1677. London, printed by T. M. for W. Cademan, at the Pope's Head, in the Lower Walk of the New Exchange in the Strand, 1677." This play is written by a Mr. Thomas Rawlins, printer and engraver to the Mint, under Charles the First and Second, and is founded on two French comedies—-viz., Molière's Sganarelle, and Thomas Corneille's Don César d' Avalos. The prologue is too bad to be quoted, and I doubt if it can ever have been spoken on any stage. This play is written partly in blank verse, partly in prose; though very coarse, it is, on the whole, clever and witty. Old Moneylove, a credulous fool, who has a young wife (Act ii., Scene I), reminds one at times of the senator Antonio in Otway's Venice Preserved, and is, of course, deceived by the gallant Stanley; the sayings and doings of Mrs. Moneylove, who is "what she ought not to be," and the way she tricks her husband, are very racy, perhaps too much so for the taste of the present times. I do not think any dramatist would now bring upon the stage a young lady like Theodocia, daughter of old Moneylove, reading the list about Squire Careless. Tom Essence is a seller of perfumes, a "jealous coxcomb of his wife;" and Courtly is "a sober gentleman, servant to Theodocia;" these are imitations of Sganarelle and Lelio. Loveall, "a wilde debaucht blade," and Mrs. Luce, "a widdow disguis'd, and passes for Theodocia's maid," are taken from Corneille.

In the epilogue, the whole of which cannot be given, Mrs, Essence speaks the following lines:

"But now methinks a Cloak-Cabal I see,  Whose Prick-ears glow, whilst they their Jealousie  In Essence find; but Citty-Sirs, I fear,  Most of you have more cause to be severe.  We yield you are the truest Character."

Nearly all the scenes imitated in this play from Molière's Sganarelle contain nothing which merits to be reproduced.

The Perplexed Couple, or Mistake upon Mistake, as it is acted at the New Theatre in Lincolns-Inn-Fields, by the Company of Comedians, acting under Letters Patent granted by King Charles the Second. London, Printed for W. Meares at the Lamb, and F. Brown, at the Black Swan without Temple Bar, 1715, is the third imitation of Molière's Sganarelle. This comedy, printed for two gentlemen, with zoological signs, was written by a Mr. Charles Molloy, who for a long time was the editor of a well-known paper, Common Sense, in defence of Tory principles. This play had little success, and deserved to have had none, for it has no merit whatever. Our author states in the prologue:—

"The injur'd Muses, who with savage Rage,  Of late have often been expell'd a Tyrant Stage,  Here fly for Refuge; where, secure from Harms,  By you protected, shall display their Charms…  No Jest profane the guilty scene deforms,  That impious way of being dull he scorns;  No Party Cant shall here inflame the Mind,  And poison what for Pleasure was designed."