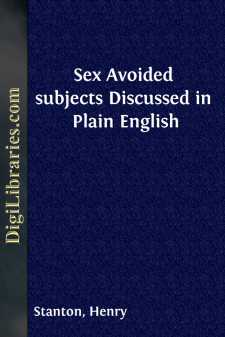 The happiness of all human beings, men and women, depends largely on their rational solution of the sexual problem. Sex and the part it plays in human life cannot be ignored. In the case of animals sex plays a simpler and less complex rôle. It is a purely natural and instinctive function whose underlying purpose is the perpetuation of the species. It is not complicated by the many incidental phenomena which result, in man's case, from psychologic, economic, moral and religious causes. Climate, social conditions, individual modes of life and work, alcohol, wealth and poverty, and other factors affect sexual activity in human beings.

Sexual love, which is practically unknown to the animals, is a special development of the sex urge in the human soul. The deeper purpose of the sex function in human beings, likewise, is procreation, the reproduction of species.

The average man, woman and child should know the essential sex facts in order to be able to deal with the sex problems of life. Of late years there has been a greater diffusion of such knowledge. To a large extent, however, children and adolescents are still taught to look on all that pertains to sex as something shameful and immodest, something not to be discussed. Sex is an “Avoided Subject.”

This is fundamentally wrong. Sex affects the very root of all human life. Its activities are not obscene, but Nature's own means to certain legitimate ends. The sex functions, when properly controlled and led into the proper channels, are a most essential and legitimate form of physical self-expression. The veil of secrecy with which they are so often shrouded tends to create an altogether false impression regarding them. This discussion of these “Avoided Subjects,” in “Plain English,” is intended to give the salient facts regarding sex in a direct, straightforward manner, bearing in mind the true purpose of normal sex activities.

The more we know of the facts of sex, the right and normal part sex activities play in life, and all that tends to abuse and degrade them, the better able we will be to make sex a factor for happiness in our own lives and that of our descendants. Mankind, for its own general good, must desire that reproduction—the real purpose of every sexual function—occur in such a way as to perpetuate its own best physical and mental qualities.

THE LAW OF PHYSICAL LIFE

It is a universal rule of physical life that every individual being undergoes a development which we know as its individual life and which, so far as its physical substance is concerned, ends with death. Death is the destruction of the greater part of this individual organism which, when death ensues, once more becomes lifeless matter. Only small portions of this matter, the germ cells, continue to live under certain conditions which nature has fixed.

The germ cell—as has been established by the microscope—is the tiny cell which in the lowest living organisms as well as in man himself, forms the unit of physical development....