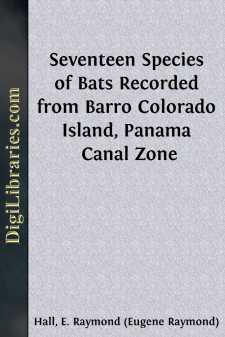 Our aim is to bring up to date the list of kinds of bats actually known from Barro Colorado Island, Panamá. In 1952 Samuel T. Dickenson, Marguerite Schultz, George P. Young, and E. Raymond Hall spent the first 17 days of April (except Mrs. Schultz who left on April 8) on Barro Colorado Island. On eight evenings a silk net, 30 feet long and 7 feet high with a ¾-inch mesh, was stretched in an open place to intercept bats. On the first five nights it was stretched in the laboratory clearing. On April 6 the net was erected in the forest across the Barbara Lathrop Trail 25 feet past its entrance; on the 7th and 8th the net was placed across the Snyder-Molino Trail at the Termite Cemetery, 150 yards southwest of the new (built in 1952) laboratory.

William B. Jackson was on the island from January 30 to June 6, 1952, as a member of a group from the American Museum of Natural History. On May 4 he set the bat net across Allee Creek at the beginning of the Barbara Lathrop Trail, and from May 5 to 27 he set the net in the Termite Cemetery where it was mounted between two small trees with its lower edge approximately 5 feet above the ground. Unless otherwise stated, specimens were caught in this net.

On Barro Colorado Island one aim is to preserve the biota and natural conditions with as little interference from man as possible. Consequently most of the bats captured were released after being wing-banded by Jackson with U.S. Fish and Wildlife Service bat bands; but an attempt was made, with the permission of Mr. James Zetek, Resident Custodian of the Canal Zone Biological Area administered through the Smithsonian Institution, to save one or a few specimens of each species for positive identification. Catalogue numbers are of the University of Kansas, Museum of Natural History, unless otherwise indicated. We are obliged to Mr. Colin C. Sanborn and Mr. Robert J. Russell for checking our identifications of the specimens. Assistance with field work is acknowledged from the Kansas University Endowment Association, the United States Navy, Office of Naval Research, through contract No. NR–161–791, and Mr. James Zetek.

Saccopteryx bilineata (Temminck).—Nos. 45061, 45062, 45097, and 402 and 404 of Jackson. Nonpregnant female No. 45061 captured on April 3 weighed 7.0 grams; No. 45062 captured on April 4 contained one embryo 22 mm. long. It was common to see several bats of this species, not in a cluster but with a few inches of space between any one bat and its neighbors, on the vertical screens that covered the airways beneath the eaves of the buildings. A colony was established in Zetek House (a trail-end house on the western side of the Island), and several individuals often were seen in the Tower House. As many as 50 individuals could be found at the Van Tyne Big Tree (Bombacopsis Fendleri) where they hung singly in the shaded inter-buttress spaces and on the exposed trunk sometimes up to a height of 100 feet. Occasionally several individuals would be seen in inter-buttress spaces of large trees on other parts of the Island. These bats were more alert during the daylight hours than were most other kinds of bats and could be approached and captured only with considerable difficulty. From the various colonies 13 females and 3 males were banded.