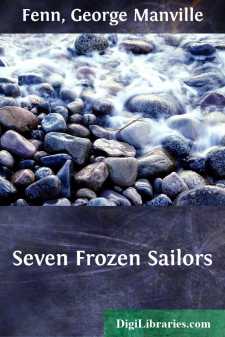 Chapter One. How We Got There.

“But what are we going for?”

If he had not been so much of a gentleman, I should have said that the half-closing of his left eye and its rapid reopening had been a wink; as it was, we will say it was not. The next moment, he had thrown himself back in his chair, smiled, and said, quietly. “Not yet, captain—not yet. I’ll tell you by-and-by. At present it is my secret. Waiter, fill these glasses again!”

“But look here,” I said, as soon as the waiter had done his duty, “you can’t sail right up into the Arctic circle without a crew.”

He rose solemnly from his chair, crossed to my side, and shook hands, before wabbling back and sitting down, filling the old-fashioned Windsor armchair so very full, that I wondered it didn’t come to pieces.

I don’t want to be personal, but he certainly was the fattest man I ever saw, and the most active. The Claimant was nothing to him. He looked perfectly stupid, as he sat there with a great wattle under his chin, which came all over his white neckerchief and clean-frilled shirt; and as he talked to you, he kept spinning round the great bunch of gold seals at the end of a watered silk ribbon, that hung over his glossy black trousers, while the huge flaps of his black bob-tail coat hung over the sides of the chair.

“Tell them—tell them,” he said, musing,—“tell them seal, and we’ll do a bit of sealing on the voyage; but, my dear Captain Cookson, the real object of our trip is at present under seal. You understand?”

“Then get a good staunch, picked crew, and don’t spare for expense. You’ll want good first and second mates. Shall I engage them?”

“Begging the gentleman’s pardon,” he said, wiping a little brown juice out of each corner of his mouth; “I only wanted a word with you, skipper. Binny Scudds is outside.”

Abram looked from one to the other, rubbed his hollow, sallow cheeks, upon which there was not a particle of hair, and then his body swayed about as if, being so thin, the draught of the door was blowing him,—“Bring him in?” he said.

Tall, thin, Abram Bostock stared at my companion for a moment, and then backed out, to return directly with my old bos’en, Abinadab Scudds, half leading, half dragging him; and no sooner was the mahogany-faced old salt inside the door, and caught sight of the stranger, than he slewed round, and was half outside before Abram growled out, “Avast there!” collared him, and bringing him back, closed the door; when Scudds growled out something that seemed to come from somewhere below his waistband, and then, thoroughly captured, he stood, rolling his one eye from one to the other, and began to rub his shaggy head, ending by an old habit of his—namely, taking out a piece of rope, and beginning to unlay it....