Separation and Service or Thoughts on Numbers VI, VII. 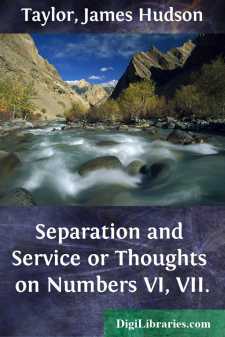 For many years these chapters had no special interest to me; but I have never ceased to be thankful that I was early led to read the Word of God in regular course: it was through this habit that these chapters first became specially precious to me. I was travelling on a missionary tour in the province of Cheh-kiang, and had to pass the night in a very wicked town. All the inns were dreadful places; and the people seemed to have their consciences seared, and their hearts sealed against the Truth. My own heart was oppressed, and could find no relief; and I awoke the next morning much cast down, and feeling spiritually hungry and thirsty indeed.

On opening my Bible at the seventh chapter of Numbers, I felt as though I could not then read that long chapter of repetitions; that I must turn to some chapter that would feed my soul. And yet I was not happy in leaving my regular portion; so after a little conflict I resolved to read it, praying to God to bless me, even through Numb. vii. I fear there was not much faith in the prayer; but oh! how abundantly it was answered, and what a feast God gave me! He revealed to me His own great heart of love, and gave me the key to understand this and the previous chapter as never before. May God make our meditations upon them as helpful to others as they were then and have ever since continued to be to myself.

Much is revealed in these chapters in germ which is more fully brought out in the New Testament. Under the Old Covenant many blessings were enjoyed in measure and for a season, which in this dispensation are ours in their fulness and permanence. For instance, the atoning sacrifices of the seventh month had to be repeated every year; but Christ, in offering Himself once for all, perfected for ever them that are sanctified. The Psalmist needed to pray, "Take not Thy Holy Spirit from me;" but Christ has given us the Comforter to abide with us for ever. In like manner the Israelite might vow the vow of a Nazarite and separate himself unto God for a season; but it is the privilege of the Christian believer to know himself as always separated to God. Many other lessons, which are hidden from careless and superficial readers, are suggested by these chapters, which the Holy Spirit will reveal to prayerful students of His most precious and most perfect Book.

The portions we have selected consist of first a short chapter, and then a very long one, which at first sight appears to have no special connection with it. But on more careful reflection we shall see that the order of the subjects referred to shows that there is really a natural and close connection between them. We shall find that Separation to God is followed by Blessing from God; and that those who receive large blessing from Him, in turn render to Him acceptable Service: service in which God takes delight, and which He places in everlasting remembrance.

PART I. Separation to God. Numb. vi. 1-21. THE INSTITUTION OF THE ORDER OF NAZARITES.

The first twenty-one verses of Numb....