Sentimental Tommy The Story of His Boyhood 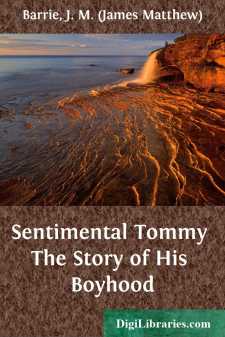 CHAPTER I TOMMY CONTRIVES TO KEEP ONE OUT

The celebrated Tommy first comes into view on a dirty London stair, and he was in sexless garments, which were all he had, and he was five, and so though we are looking at him, we must do it sideways, lest he sit down hurriedly to hide them. That inscrutable face, which made the clubmen of his later days uneasy and even puzzled the ladies while he was making love to them, was already his, except when he smiled at one of his pretty thoughts or stopped at an open door to sniff a potful. On his way up and down the stair he often paused to sniff, but he never asked for anything; his mother had warned him against it, and he carried out her injunction with almost unnecessary spirit, declining offers before they were made, as when passing a room, whence came the smell of fried fish, he might call in, "I don't not want none of your fish," or "My mother says I don't not want the littlest bit," or wistfully, "I ain't hungry," or more wistfully still, "My mother says I ain't hungry." His mother heard of this and was angry, crying that he had let the neighbors know something she was anxious to conceal, but what he had revealed to them Tommy could not make out, and when he questioned her artlessly, she took him with sudden passion to her flat breast, and often after that she looked at him long and woefully and wrung her hands.

The only other pleasant smell known to Tommy was when the water-carts passed the mouth of his little street. His street, which ended in a dead wall, was near the river, but on the doleful south side of it, opening off a longer street where the cabs of Waterloo station sometimes found themselves when they took the wrong turning; his home was at the top of a house of four floors, each with accommodation for at least two families, and here he had lived with his mother since his father's death six months ago. There was oil-cloth on the stair as far as the second floor; there had been oil-cloth between the second floor and the third—Tommy could point out pieces of it still adhering to the wood like remnants of a plaster.

This stair was nursery to all the children whose homes opened on it, not so safe as nurseries in the part of London that is chiefly inhabited by boys in sailor suits, but preferable as a centre of adventure, and here on an afternoon sat two. They were very busy boasting, but only the smaller had imagination, and as he used it recklessly, their positions soon changed; sexless garments was now prone on a step, breeches sitting on him.

Shovel, a man of seven, had said, "None on your lip. You weren't never at Thrums yourself."

Tommy's reply was, "Ain't my mother a Thrums woman?"

Shovel, who had but one eye, and that bloodshot, fixed it on him threateningly.

"The Thames is in London," he said.

"'Cos they wouldn't not have it in Thrums," replied Tommy.

"The cemetery is in Thrums," said Tommy.

"There ain't no queens in Thrums, anyhow."

"Well, then, if you jest seed Trafalgar Square!"

"If you jest seed the Thrums town-house!"