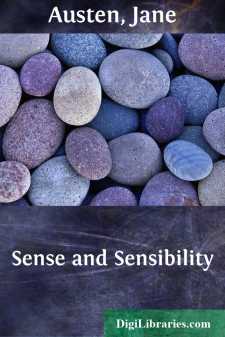 With the title of Sense and Sensibility is connected one of those minor problems which delight the cummin-splitters of criticism. In the Cecilia of Madame D'Arblay—the forerunner, if not the model, of Miss Austen—is a sentence which at first sight suggests some relationship to the name of the book which, in the present series, inaugurated Miss Austen's novels. 'The whole of this unfortunate business'—says a certain didactic Dr. Lyster, talking in capitals, towards the end of volume three of Cecilia—'has been the result of Pride and Prejudice,' and looking to the admitted familiarity of Miss Austen with Madame D'Arblay's work, it has been concluded that Miss Austen borrowed from Cecilia, the title of her second novel. But here comes in the little problem to which we have referred. Pride and Prejudice it is true, was written and finished before Sense and Sensibility—its original title for several years being First Impressions. Then, in 1797, the author fell to work upon an older essay in letters à la Richardson, called Elinor and Marianne, which she re-christened Sense and Sensibility. This, as we know, was her first published book; and whatever may be the connection between the title of Pride and Prejudice and the passage in Cecilia, there is an obvious connection between the title of Pride and Prejudice and the title of Sense and Sensibility. If Miss Austen re-christened Elinor and Marianne before she changed the title of First Impressions, as she well may have, it is extremely unlikely that the name of Pride and Prejudice has anything to do with Cecilia (which, besides, had been published at least twenty years before). Upon the whole, therefore, it is most likely that the passage in Madame D'Arblay is a mere coincidence; and that in Sense and Sensibility, as well as in the novel that succeeded it in publication, Miss Austen, after the fashion of the old morality plays, simply substituted the leading characteristics of her principal personages for their names. Indeed, in Sense and Sensibility the sense of Elinor, and the sensibility (or rather sensiblerie) of Marianne, are markedly emphasised in the opening pages of the book But Miss Austen subsequently, and, as we think, wisely, discarded in her remaining efforts the cheap attraction of an alliterative title. Emma and Persuasion, Northanger Abbey and Mansfield Park, are names far more in consonance with the quiet tone of her easy and unobtrusive art.

Elinor and Marianne was originally written about 1792. After the completion—or partial completion, for it was again revised in 1811—of First Impressions (subsequently Pride and Prejudice), Miss Austen set about recasting Elinor and Marianne, then composed in the form of letters; and she had no sooner accomplished this task, than she began Northanger Abbey. It would be interesting to know to what extent she remodelled Sense and Sensibility in 1797-98, for we are told that previous to its publication in 1811 she again devoted a considerable time to its preparation for the press, and it is clear that this does not mean the correction of proofs alone, but also a preliminary revision of MS. Especially would it be interesting if we could ascertain whether any of its more finished passages, e.g. the admirable conversation between the Miss Dashwoods and Willoughby in chapter x., were the result of those fallow and apparently barren years at Bath and Southampton, or whether they were already part of the second version of 1797-98. But upon this matter the records are mute. A careful examination of the correspondence published by Lord Brabourne in 1884 only reveals two definite references to Sense and Sensibility and these are absolutely unfruitful in suggestion. In April 1811 she speaks of having corrected two sheets of 'S and S,' which she has scarcely a hope of getting out in the following June; and in September, an extract from the diary of another member of the family indirectly discloses the fact that the book had by that time been published. This extract is a brief reference to a letter which had been received from Cassandra Austen, begging her correspondent not to mention that Aunt Jane wrote Sense and Sensibility. Beyond these minute items of information, and the statement—already referred to in the Introduction to Pride and Prejudice—that she considered herself overpaid for the labour she had bestowed upon it, absolutely nothing seems to have been preserved by her descendants respecting her first printed effort....