Self-Denial or, Alice Wood, and Her Missionary Society 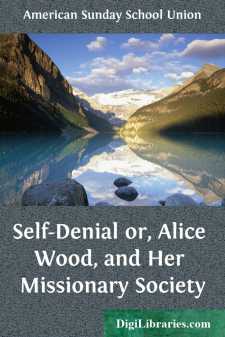 The village school-house was situated on a pretty green, and surrounded by old elm-trees, and at a short distance and in full sight was a candy-shop, kept by an old woman, whom the children called Mother Grimes. Mother Grimes knew how to make the very best candies and cakes that ever were eaten, and almost every day she displayed in her shop-window some new kind of cake, or some new variety of candy, to excite the curiosity or tempt the palates of her little customers, who found it a very difficult matter to pass Mother Grimes's shop on their way from school.

One day, just after the school-bell rang to give notice of the recess, a pretty little girl, by the name of Alice Wood, was seen very busily running about among the school-girls and whispering to one and another. Her object was to induce them to remain a little while after the school, as she had something to propose to them. Alice was a great favourite, as she was always willing to put herself to any inconvenience for the sake of giving any one else pleasure. So they all readily consented to stay, if it were only to please her.

After school was out and the teacher had left, Alice collected the girls together and told them her plan. "Girls," said she, "last night I went to the missionary meeting, and some of you were there too. We heard a missionary speak, who has just come back from India, and he told us of the millions of poor degraded and ignorant people there, who have never heard of God or the Bible, and who worship idol gods of wood and stone, and sacrifice their children and themselves to these dumb idols; and he told us of millions in other countries who are just as ignorant and degraded, besides the multitudes in our own land who know nothing of the Bible or the way of salvation. I knew all this before, to be sure, for I have often heard it; but I never felt it as I did last night; and when the missionary called upon us children and told us that we could do something to save these immortal souls, I felt, for the first time in my life, that it was my duty, by denying myself some gratifications and by trying to save money in other ways, to do all that I could to send the word of God to those who are perishing. Girls," said she, with earnestness, "I could hardly sleep last night, for I was all the time going over in my mind the different ways in which I might earn or save something, and I thought if all our school were to feel as I did, and join me in this, we might collect a great many dollars a year."

Here some of the older girls began to whisper to each other that they had no money to spare, and that their parents could not give them money every day to send to the heathen.

"Now stop a little while, girls, if you please," said Alice, "till I just tell you what I want to have done. In the first place, I think it will be so pleasant to form a sewing Society, to meet on Saturday afternoons, and make bags and needle-cases and collars and many other things to sell; and I know my father will be delighted to have us put a box, with these things, in his store. Then, while we sew, I propose that one reads aloud from some interesting book or paper about missions and benevolent societies, and thus we shall all become interested in the intelligence, and be more willing to work and save to help the needy." Alice then, with a great deal of tact, proposed the names of those who should be President, Secretary, and Treasurer of their Society, selecting the very ones who had been opposed to her plan. One large girl was still dissatisfied, and declared she would not join them, till Alice moved that she should be appointed reader....