Selections from the Prose Works of Matthew Arnold 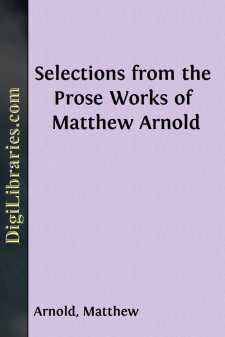 "The gray hairs on my head are becoming more and more numerous, and I sometimes grow impatient of getting old amidst a press of occupations and labor for which, after all, I was not born. But we are not here to have facilities found us for doing the work we like, but to make them." This sentence, written in a letter to his mother in his fortieth year, admirably expresses Arnold's courage, cheerfulness, and devotion in the midst of an exacting round of commonplace duties, and at the same time the energy and determination with which he responded to the imperative need of liberating work of a higher order, that he might keep himself, as he says in another letter, "from feeling starved and shrunk up." The two feelings directed the course of his life to the end, a life characterized no less by allegiance to "the lowliest duties" than by brilliant success in a more attractive field.

Matthew Arnold was born at Laleham, December 24, 1822, the eldest son of Thomas Arnold, the great head master of Rugby. He was educated at Laleham, Winchester, Rugby, and Balliol College, Oxford. In 1845 he was elected a fellow of Oriel, but Arnold desired to be a man of the world, and the security of college cloisters and garden walls could not long attract him. Of a deep affection for Oxford his letters and his books speak unmistakably, but little record of his Oxford life remains aside from the well-known lines of Principal Shairp, in which he is spoken of as

So full of power, yet blithe and debonair,  Rallying his friends with pleasant banter gay.

From Oxford he returned to teach classics at Rugby, and in 1847 he was appointed private secretary to Lord Lansdowne, then Lord President of the Council. In 1851, the year of his marriage, he became inspector of schools, and in this service he continued until two years before his death. As an inspector, the letters give us a picture of Arnold toiling over examination papers, and hurrying from place to place, covering great distances, often going without lunch or dinner, or seeking the doubtful solace of a bun, eaten "before the astonished school." His services to the cause of English education were great, both in the direction of personal inspiration to teachers and students, and in thoughtful discussion of national problems. Much time was spent in investigating foreign systems, and his Report upon Schools and Universities on the Continent was enlightened and suggestive.

Arnold's first volume of poems appeared in 1849, and by 1853 the larger part of his poetry was published. Four years later he was appointed Professor of Poetry at Oxford. Of his prose, the first book to attract wide notice was that containing the lectures On Translating Homer delivered from the chair of Poetry and published in 1861-62. From this time until the year of his death appeared the remarkable series of critical writings which have placed him in the front rank of the men of letters of his century. He continued faithfully to fulfill his duties as school inspector until April, 1886, when he resigned after a service of thirty-five years....