Selections from the Poems and Plays of Robert Browning 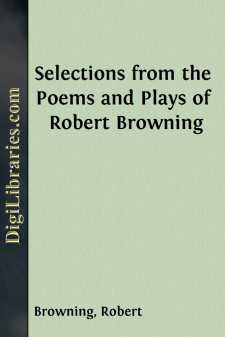 THE LIFE OF BROWNING

Robert Browning, the poet, was the third of that name. The first Robert Browning, a man of energy and ability, held an important post in the Bank of England. His wife, Margaret Tittle, was a Creole from the West Indies, and at the time of her marriage her property was still in the estates owned by her father near St. Kitts. When their son, the second Robert, was seven years of age, his mother died, and his father afterwards married again. The second wife's ascendency over her husband was unfortunately exerted against the best interests of the son. His desire to become an artist, his wish for a university training, were disregarded, and he was sent instead to St. Kitts, where he was given employment on his mother's sugar plantations. The breach between Robert and his father became absolute when the boy defied local prejudice by teaching a negro to read, and when, because of what his father considered a sentimental objection to slavery, he finally refused to remain in the West Indies. The young man returned to England and at twenty-two started on an independent career as a clerk in the Bank of England. In 1811 he married Sarah Anne Wiedemann. They settled in Camberwell, London, where Robert, the poet, was born, May 7, 1812, and his sister Sarianna in 1814.

Browning's father was a competent official in the Bank and a successful business man, but his tastes were æsthetic and literary, and his leisure time was accordingly devoted to such pursuits as the collection of old books and manuscripts. He also read widely in both classic and modern literatures. The first book of the Iliad he knew by heart, and all the Odes of Horace, and he was accustomed to soothe his child to sleep by humming to him snatches of Anacreon to the tune of "A Cottage in the Wood." Mr. Browning had also considerable skill in two realms of art, for he drew vigorous portraits and caricatures, and he had, even according to his son's mature judgment, extraordinary force and facility in verse-making. In character he was serene, lovable, gentle, "tenderhearted to a fault." So instinctively chivalrous was he that there was "no service which the ugliest, oldest, crossest woman in the world might not have exacted of him." He was a man of great physical vigor, dying at the age of eighty-four without ever having been ill.

Browning's mother was the daughter of William Wiedemann, a German who had settled in Dundee and married a Scotch wife. Mrs. Browning impressed all who knew her by her sweetness and goodness. Carlyle spoke of her as "the true type of a Scottish gentlewoman"; her son's friend, Mr. Kenyon, said that such as she had no need to go to heaven, because they made it wherever they were; and her son called her "a divine woman." She had deep religious instincts and concerned herself particularly with her son's moral and spiritual development. The bond between them was always very strong, and when she died in 1849 his wife wrote, "He has loved his mother as such passionate natures can love, and I never saw a man so bowed down in an extremity of sorrow—never."

Robert Browning's childhood was passed in an unusually serene and happy home....