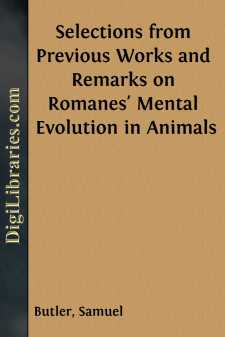 I delayed these pages some weeks in order to give Mr. Romanes an opportunity of explaining his statement that Canon Kingsley wrote about instinct and inherited memory in Nature, Jan. 18, 1867.   I wrote to the Athenæum (Jan. 26, 1884) and pointed out that Nature did not begin to appear till nearly three years after the date given by Mr. Romanes, and that there was nothing from Canon Kingsley on the subject of instinct and inherited memory in any number of Nature up to the date of Canon Kingsley’s death.  I also asked for the correct reference.

This Mr. Romanes has not thought it incumbent upon him to give.  I am told I ought not to have expected him to give it, inasmuch as it is no longer usual for men of any but the lowest scientific standing to correct their misstatements when they are brought to book.  Science is made for Fellows of the Royal Society, and for no one else, not Fellows of the Royal Society for science; and if the having achieved a certain position should still involve being obliged to be as scrupulous and accurate as other people, what is the good of the position?  This view of the matter is practical, but I regret that Mr. Romanes should have taken it, for his having done so has prevented my being able to tell the reader what Canon Kingsley said about memory and instinct, and this he might have been glad to know.

I suspect, however, that what Canon Kingsley said was after all not very important.  If it had been, Mr. Romanes would have probably told us what it was in his own book.  I should think it possible that Mr. Romanes—not finding Canon Kingsley’s words important enough to be quoted, or even referred to correctly, or never having seen them himself and not knowing exactly what they were, yet being anxious to give every one, and more particularly Canon Kingsley, his due—felt that this was an occasion on which he might fairly take advantage of his position and say at large whatever he was in the humour for saying at the moment.

I should not have thought this possible if I had not ere now had reason to set Mr. Romanes down as one who was not likely to be squeamish about trifles.  Nevertheless, on this present occasion I certainly did think that he had only made a slip such as we all make sometimes, and such as he would gladly take the earliest opportunity to correct.  As it is, I do not know what to think, except that D.C.L.’s and F.R.S.’s seem to be made of much the same frail materials as we ordinary mortals are.

As regards the extracts from my previous books given in this volume, I should say that I have revised and corrected the original text throughout, and introduced a sentence or two here and there, but have nowhere made any important alteration.  I regret greatly that want of space has prevented me from being able to give the chapters from Life and Habit on “The Abeyance of Memory,” and “What we should expect to find if Differentiations of Structure and Instinct are mainly due to Memory;” it is in these chapters that an explanation of many phenomena is given, of which, so far as I know, no explanation of any kind had been previously attempted, and in which phenomena having apparently so little connection as the sterility of hybrids, the principle underlying longevity, the resumption of feral characteristics, the sterility of many animals under confinement, are not only made intelligible but are shown to be all part and parcel of the same story—all being explicable as soon as Memory is made the main factor of heredity.