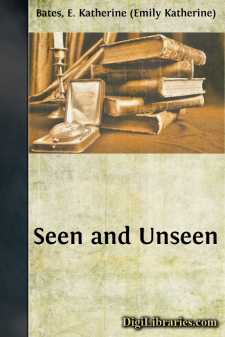 Many years ago, whilst living at Oxford, I was invited by a very old friend, who had recently taken his degree, to a river picnic; with Nuneham, I think, as its alleged object.

Unfortunately, the day proved unfavourable, and we returned in open boats, also with open umbrellas; a generally drenched and bedraggled appearance, and nothing to cheer us on the physical plane except a quantity of iced coffee which had been ordered in anticipation of a tropical day.

Under these rather trying conditions I can remember getting a good deal of amusement out of the companions in the special boat which proved to be my fate. Our host, being a clever and interesting man himself, had collected clever and interesting people round him, on the "Birds of a Feather" principle, and I happened to sit between two ladies, one the wife (now, alas! the widow) of a man who was to become later on one of our most famous bishops; the other—her bosom friend and deadly rival—the wife of an equally distinguished Oxford don.

The iced coffee combined with the pouring rain may have been partly to blame, but certainly the conversation that went on between the two ladies, across my umbrella, was decidedly Feline.

To pass the time we were valiantly endeavouring to play "Twenty Questions" from the bottom of the boat, and the Bishop's widow was asking the questions. She had triumphantly elicited the fact that we had thought of a cinder—and an historical cinder—and the twentieth and last permissible question was actually hovering on her lips. "It was the cinder that Richard Cœur de Lion's horse fell upon," she said eagerly. Of course, we all realised that this was a most obvious "slip" in the case of so highly educated a woman; but the Bosom Friend could not resist putting out the velvet paw: "A little confusion in the centuries, I think, dear," she said sweetly. The unfortunate questioner practically "never smiled again" during that expedition. But a still more crushing blow was in store for her.

The conversation turned later upon questions of style in writing or speaking, and with perhaps pardonable revenge, she said to her rival:

"I always notice that you say 'one' so often—'one does this or that,' and so forth."

"Really, dear? That is curious. Now I always notice that you say 'I' so continually!"

The cut and thrust came with the rapidity of expert fencers.

And this brings me to the real gist of my story.

It is considered the most heinous offence "to say I," and every conceivable device is resorted to, no matter how clumsy, in order to prevent the catastrophe of a writer being forced to speak of himself in the first person.

To my mind, there is a good deal of affectation and pose about this, and in anything of an autobiography it becomes insupportable.

"The writer happened upon one occasion to be present, etc." "He who pens these unworthy pages was once travelling to Scotland, etc. etc."

Which of us has not groaned under these self-conscious euphemisms? "Why not say 'I' and have done with it?" we are wont to exclaim in desperation after pages of this kind of thing.

Now I propose "to say I" and "have done with it," and not waste time in trying to find ingenious and wearisome equivalents....