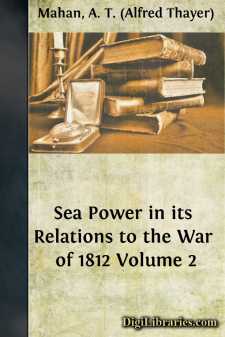 The squadron under Commodore William Bainbridge, the third which sailed from the United States in October, 1812, started nearly three weeks after the joint departure of Rodgers and Decatur. It consisted of the "Constitution" and sloop of war "Hornet," then in Boston, and of the "Essex," the only 32-gun frigate in the navy, fitting for sea in the Delaware. The original armament of the latter, from which she derived her rate, had been changed to forty 32-pounder carronades and six long twelves; total, forty-six guns. It is noticeable that this battery, which ultimately contributed not merely to her capture, but to her almost helplessness under the fire of an enemy able to maintain his distance out of carronade range, was strongly objected to by Captain Porter. On October 14 he applied to be transferred to the "Adams," giving as reasons "my insuperable dislike to carronades, and the bad sailing of the "Essex," which render her, in my opinion, the worst frigate in the service." The request was not granted, and Porter sailed in command of the ship on October 28, the two other vessels having left Boston on the 26th.

In order to facilitate a junction, Bainbridge had sent Porter full details of his intended movements. A summary of these will show his views as to a well-planned commerce-destroying cruise. Starting about October 25, he would steer first a course not differing greatly from the general direction taken by Rodgers and Decatur, to the Cape Verde Islands, where he would fill with water, and by November 27 sail for the island Fernando de Noronha, two hundred and fifty miles south of the Equator, and two hundred miles from the mainland of Brazil, then a Portuguese colony, of which the island was a dependency. The trade winds being fair for this passage, he hoped to leave there by December 15, and to cruise south along the Brazilian coast as far as Rio de Janeiro, until January 15. In the outcome the meeting of the "Constitution" with the "Java" cut short her proceedings at this point; but Bainbridge had purposed to stay yet another month along the Brazilian coast, between Rio and St. Catherine's, three hundred miles south. Thence he would cross the South Atlantic to the neighborhood of St. Helena, remaining just beyond sight of it, to intercept returning British Indiamen, which frequently stopped there. Porter failed to overtake the other vessels, on account of the bad sailing of the "Essex." He arrived at Fernando de Noronha December 14, one day before that fixed by Bainbridge as his last there; but the "Constitution" and "Hornet" had already gone on to Bahia, on the Brazilian mainland, seven hundred miles to the southwest, leaving a letter for him to proceed off Cape Frio, sixty miles from the entrance of Rio. He reached this rendezvous on the 25th, but saw nothing of Bainbridge, who had been detained off Bahia by conditions there. The result was that the "Essex" never found her consorts, and finally struck out a career for herself, which belongs rather to a subsequent period of the war....