Sculpture of the Exposition Palaces and Courts 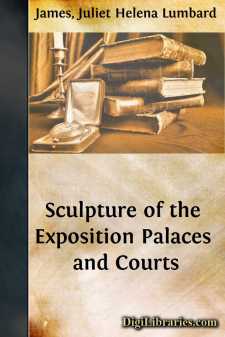 Add to My Favorites
Published: 9 years ago
Downloads: 126
Rating: (0 Votes)

Sculpture of the Exposition Palaces and Courts

"The influence of sculpture is far reaching. The mind that loves this art and understands its language will more and more insist on a certain order and decorum in visual life. It opens an avenue for the expression of aesthetic enjoyment somewhere between poetry and music and akin to drama. - Arthur Hoeber

The Fountain of Energy

The Fountain of Energy is a monumental aquatic composition expressing in exuberant allegory the triumph of Energy, the Lord of the Isthmian Way. It is the central sculptural feature of the South Garden, occupying the great quatrefoil pool in front of the tower. The theme is Energy, the Conqueror - the Over Lord - the Master; Energy, mental and physical; Energy - the Will, the indomitable power that achieved the Waterway between the Oceans at Panama. The Earth Sphere, supported by an undulating frieze of mer-men and women, is his pedestal. Advancing from it in the water at the four relatively respective points of the compass, North, South, East and West, are groups representing the Atlantic and the Pacific Oceans and the North and the South Seas; groups richly imaginative, expressing types of Oriental, Occidental, Southern and Northern land and sea life. The interrupted outer circle of water motifs represent Nereids driving spouting fish. Vertical zones of writhing figures ascend the sphere at the base of the Victor. Across the upper portions of the sphere, and modeled as parts of the Earth, stretch titanic zoomorphs, representing the Hemispheres, East and West. The spirit of the Eastern Hemisphere is conceived as feline and characterized as a human tiger cat. The spirit of the Western Hemisphere is conceived as taurine and characterized as a human bull. The base of the Equestrian is surrounded by a frieze of architecturalized fish and the rearing sea horses that furnish the principal upper motif for the play of water. Energy himself is presented as a nude male, typically American, standing in his stirrups astride a snorting charger - an exultant super-horse needing no rein - commanding with grandly elemental gesture of extended arms, the passage of the Canal. Growing from his shoulders, winged figures of Fame and Valor with trumpet, sword and laurel, forming a crest above his controlling head, acclaim his triumph. The Fountain embodies the mood of joyous, exultant power and exactly expresses the spirit of the Exposition. Its unique decorative character has been aptly described as heraldic, "The Power of America rising from the Sea."

The Mother of Tomorrow

With upturned face, with steady onward gaze, the stalwart Mother of Tomorrow moves ahead. Hers is the firm, determined purpose, the will to do - to accomplish that for which she has started. She marches ahead of the types of the Occident. It has taken all these types striving with common purpose to produce the future, therefore they form the Mother of Tomorrow, the matrix from which the future generations are to come....