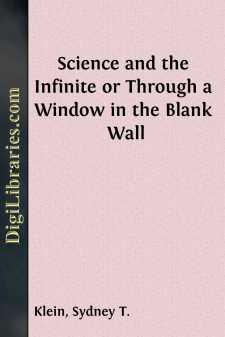 In venturing to prepare this little volume for the eyes of the reading public, I am fully aware of the difficulties of the subject and the inadequacy of the expressions I have been able to employ, but I have made the attempt at the request of those who have found consolation in some of the thoughts herein embodied; and the messages left by others before they passed away, embolden me to hope that many others may find in this volume some points of interest which will help them to appreciate better the "joys" which this life has for those who know how to look for them, and that perhaps others may even gain a clearer conception of that which awaits us beyond the Veil.

Many of us allow ourselves to be overwhelmed by the small worries and vexations of everyday life, clothing them with a reality quite disproportionate to their importance; we are too apt to look at them, as it were, through a powerful microscope, piling power upon power of magnification, until we have made mountains out of mole-hills, whereas if we treated them at their true value we should look at them through a telescope, in the reverse direction, when they would appear not only trivial, but would be seen to be too remote to have any material effect on our lives.

The sub-title of this volume, and indeed its inception, arose from my lately coming in contact with one of those establishments which are doing for humanity what a mother's arms do for the child who is "sick unto death"—a beautiful home with cheerful rooms and cheerful nurses, where patients are tenderly cared for after severe operations, carried through by our most famous surgeons, some cases, alas, almost hopeless from the first. At the head of this establishment was one of those kindly self-abnegating personalities, whose loving sympathy and encouragement have comforted the dying and smoothed the path for many a weary pilgrim passing from this life to the next. With immense responsibilities on her shoulders, and after a day full of strenuous work, the head of this establishment would often sit through the night for hours by the couch of those whose lives could not possibly be prolonged for more than a few days. It was a few simple answers elicited by the questions brought to me from those poor sufferers, and the way such answers seemed to calm anxieties connected with the fear of death and to render the impenetrable Veil more transparent, which suggested the title, "Through a Window in the Blank Wall."

I do not wish to lay claim to having made any startling discovery; similar thoughts, especially those concerning the non-reality of Time and Space, have no doubt occurred to others, but the whole problem "What is the Reality?" has been insistently pressing on me ever since I can remember, and I have tried to give here in simple colloquial language, without any attempt at rhetoric, the conclusions I have personally come to as to what is the Truth.

The study of ancient and modern philosophic theories is useful as showing how impossible it is, for even the greatest thinkers of any age, to grasp the Absolute with our understanding or to measure the Infinite with our finite units. The propounders of all these theories seem to me to be, without exception, looking in the wrong direction for the "Reality of Being"; they are all arguing from the standpoint of "Intellectualism" in a similar manner to that of the "Theologians" referred to in View Three. Our latest expositor of this, M. Henri Bergson, bases his theory upon "Life" being the Reality; this he postulates is a "flowing" in Time, and Movement therefore becomes for him the Reality; and yet we know that Motion is but the product of Time and Space, and these are only the two modes or limitations under which our senses act and upon which our very consciousness of living depends. Surely the Absolute cannot be localised, must be Omnipresent, and therefore independent of Space—cannot have a beginning or end, must be Omniscient, and therefore independent of Time; these two unrealities can therefore have no existence in "Reality of Being." If, then, there is any truth in "Intuition," we have, in this theory, the Reality, "Life," not only limited by the unreal but actually dependent for its very existence upon those limitations! In these Views I have attempted, on the contrary, to show that Time and Space have no existence apart from our Physical Senses; they are the modes only under which we appreciate motion, or what we call physical phenomena, and as our conceptional knowledge is based upon our perceptional knowledge, our very consciousness of living is limited by Time and Space, and we must surely therefore look behind consciousness itself, beyond the conditioning in Time and Space for the Reality of Being, otherwise physical motion, the product of these two limitations, would become the Reality of Being.

I have also suggested reasons for looking upon physical life as a mode of frequency, akin to Light, Electricity, Magnetism, Chemical Action, the Vibration of a Tuning Fork, or the Swing of a Pendulum, and therefore a transient phenomenon having to do only with the Race; Life can under these conditions only be looked upon as a reality in the same sense in which all other forms of energy or matter appear real to our finite senses—namely, as the shadows or manifestations of the Absolute on our limited plane of Consciousness.

However strongly I may be convinced—as I am—of the truth of my arguments, and however sure I may be that many others will not only agree with my conclusions, but will see that in "Introspection" rather than in "Intellectualism" lies the key to the Mystery, I do not wish to appear dogmatic in any of the suggestions contained in this volume; I am stating my own convictions, but at the same time I fully recognise that the presentation of the Absolute, with its infinite variety of aspects, must necessarily be different to every individual; we are all of the same genus, but each individual Ego is, as it were, a different species, and I do not therefore expect that my attempt to solve the Riddle of the Universe will appeal to all alike. It is, however, a true saying that "there is something to be learnt from every human being," and if I have by these suggestions succeeded in augmenting the number of those who have already started on the true "Quest," and have helped, however imperfectly, to enrich some lives with the "joy" of knowing their oneness with the All-loving, my aim has indeed been attained.

The proof that the Human Race is still in its infancy may be seen in the fact that we still require Symbolism to help us to maintain and carry forward abstract thought to higher levels, even as children require picture books for that purpose. The Glamour of Symbolism, Rapture of Music, and Ideal of Art, which come to us in later years, had their beginnings when to the child every blade of grass was a fairy tale and a grass plot a marvellous fairy forest. The great aspiration of the Human Race is to gain a knowledge of the Reality, the Noumenon behind the phenomenon; but the fact that from infancy we have been accustomed to confine our attention wholly to the objective, believing that to be the reality, has surrounded us with a concrete boundary wall through which we can only at times, with difficulty, get transient glimpses of that which is beyond. It is only in recent years that we have been able to realise that it is the Invisible which is the Real, that the visible is only its shadow or its manifestation in the Physical Universe, and that Time and Space have no existence apart from our physical senses, in short, that they are only the modes or limits under which those senses act or receive their impressions and by which they are necessarily rendered finite.

The difficulty is that our physical senses only perceive the surface of our surroundings, and that we have hitherto been looking at the Woof of Nature as though it were the glass of a window covered with patterns, smudges, flies, &c., comprising all that we call physical phenomena and which, when analysed in terms of Time and Space, produce the appearance of succession and motion. It requires a keener perception, unbounded by these limitations, to look through the glass at the Reality which is beyond. I propose then in a series of short views, through a window not hitherto unshuttered and in a direction which I believe has not before been attempted, to lead those of my readers who have the necessary aspiration, patience, and, above all, strenuous persistence, to a watch-tower, situated well above the mists and illusions of our ordinary everyday thoughts, whence they will find it possible to get a glimpse of a strange new country, and where those who have by practice once attained to its clear perception, will be able to continue the study by themselves and thus get further insight into that wonderful region of Thought which I have called "True Occultism"—the knowledge of the Invisible which is the Real in place of the Visible which is only its shadow.

Let us first try and understand the conditions under which phenomena are presented to us. In our perception of sight, we find the greater the light, the greater the shadow; a light placed over a table throws a shadow on the floor, though not sufficient to prevent our seeing the pattern of the carpet; increase the light and the shadow appears now so dark that no pattern or carpet can be seen; not that there is now less light under the table but the light above has to our sense of sight created or made manifest a greater darkness....