Scarabs The History, Manufacture and Symbolism of the Scarab?us in Ancient Egypt, Phoenicia, Sardinia, Etruria, etc. 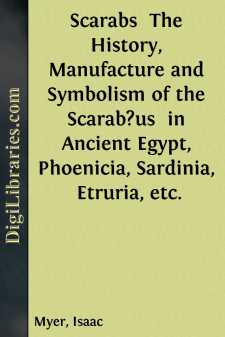 The following work is taken in part, from an address delivered by me before, The American Numismatic and Archæological Society, at its Hall in the City of New York, on March 30th, 1893. Since that time I have been led into a train of thought, having as its basis a more philosophical treatment of the meaning of the scarabæus as a symbol, in the religious metaphysic conception of it by the Ancient Egyptians, and have added much new matter. I am convinced that at the period when we first meet with the symbol of the scarabæus in Egypt, it was already the symbol and tangible expression of an elevated religious idea, embracing that of a future life of the human soul, a resurrection of it from the dead, and most likely, of a reward or punishment to it in the future life, based on its conduct when in the terrestrial life.

We know from the inscription on the lid of the coffin of Men-kau-Ra, king of the IVth, the Memphite Dynasty, (circa 3633-3600 B.C.,) and builder of the Third Pyramid at Gizeh; that some of the most elevated conceptions of the Per-em-hru, i.e., the so-called, Book of the Dead, were at that time in existence as accepted facts. The dead one at this early period became an Osiris, living eternally. We have every reason to think, that the use of the models of the scarabæus as the symbol of the resurrection or new-birth, and the future eternal life of the triumphant or justified dead, existed as an accepted dogma, before the earliest historical knowledge we have thus far been able to acquire of the Ancient Egyptians.

It most probably ante-dated the epoch of Mena, the first historical Egyptian king. How long before his period it existed, in the present condition of our knowledge of the ancient history and thought of Egypt, it is impossible to surmise. Of the aborigines of the land of Egypt we do not know nor are we very likely to know, anything. Of the race known to us as the Egyptian we can now assert with much certainty, that it was a Caucasian people, and likely came from an original home in Asia. When the invader arrived in the valley of the Nile, he appears to have been highly civilized and to have had an elevated form of religious belief.

The oldest stelæ known, one of which is now in the Ashmolean Museum at Oxford, England, and the other in the Museum at Gizeh, Egypt; were made for the tomb of Shera, who is called on them, "a prophet" and "a royal relative." He was a priest of the period of Sent, the fifth king of the IInd Dynasty, who was living about 4000 B.C. The stele is shown by Lepsius in his Auswahl, Plate 9, and is the earliest example of a hieroglyphic inscription known. These stelæ are in the form of a false door.

Upon these stelæ of Shera, is inscribed the Egyptian prayer for the soul of the dead called, the Suten-hotep-ta, from its first words. The Suten-hotep-ta was supposed to have been delivered by divine revelation. An old text speaks of, a "Suten-hotep-ta exactly corresponding to the texts of sacrificial offerings, handed down by the ancients as proceeding from the mouth of God." This prayer inscribed on the steles mentioned, asks that there may be granted the deceased in the other world, funeral oblations, "thousands of oxen, linen bandages, cakes, vessels of wine, incense, etc." This shows that at this very early period there was a belief in Egypt of the future life of the Ba, the responsible soul, and of the Ka, the vital soul, of the deceased....