Savva and the Life of Man Two plays by Leonid Andreyev 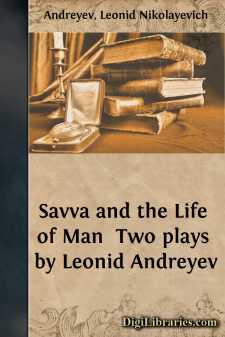 For the last twenty years Leonid Andreyev and Maxim Gorky have by turns occupied the centre of the stage of Russian literature. Prophetic vision is no longer required for an estimate of their permanent contribution to the intellectual and literary development of Russia. It represents the highest ideal expression of a period in Russian history that was pregnant with stirring and far-reaching events—the period of revolution and counter-revolution. It was a period when Russian society passed from mood to mood at an extremely rapid tempo: from energetic aggressiveness, exultation, high hope, and confident trust in the triumph of the people's cause to apathetic inaction, gloom, despair, frivolity, and religious mysticism. This important dramatic epoch in the national life of Russia Andreyev and Gorky wrote down with such force and passion that they became recognized at once as the leading exponents of their time.

Despite this close external association, their work differs essentially in character. In fact, it is scarcely possible to conceive of greater artistic contrasts. Gorky is plain, direct, broad, realistic, elemental. His art is native, not acquired. Civilization and what learning he obtained later through the reading of books have influenced, not the manner or method of his writing, but only its purpose and occasionally its subject matter. It is significant to watch the dismal failure Gorky makes of it whenever, in concession to the modern literary fashion, he attempts the mystical. Symbolism is foreign to him except in its broadest aspects. His characters, though hailing from a world but little known, and often extreme and extremely peculiar, are on the whole normal.

Andreyev, on the other hand, is a child of civilization, steeped in its culture, and while as rebellious against some of the things of civilization as Gorky, he reacts to them in quite a different way. He is wondrously sensitive to every development, quickly appropriates what is new, and always keeps in the vanguard. His art is the resultant of all that the past ages have given us, of the things that we have learned in our own day, and of what we are just now learning. With this art Andreyev succeeds in communicating ideas, thoughts, and feelings so fine, so tenuous, so indefinite as to appear to transcend human expression. He does not care whether the things he writes about are true, whether his characters are real. What he aims to give is a true impression. And to convey this impression he does not scorn to use mysticism, symbolism, or even plain realism. His favorite characters are degenerates, psychopaths, abnormal eccentrics, or just creatures of fancy corresponding to no reality. Frequently, however, the characters, whether real or unreal, are as such of merely secondary importance, the chief aim being the interpretation of an idea or set of ideas, and the characters functioning primarily only as a medium for the embodiment of those ideas.

In one respect Gorky and Andreyev are completely at one—in their bold aggressiveness....