Saved at Sea A Lighthouse Story 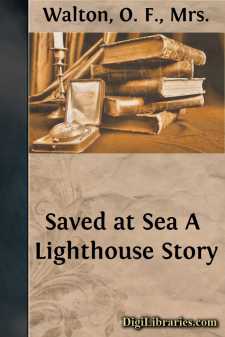 CHAPTER I. MY STRANGE HOME.

It was a strange day, the day that I was born. The waves were beating against the lighthouse, and the wind was roaring and raging against everything. Had not the lighthouse been built very firmly into the strong solid rock, it, and all within it, must have been swept into the deep wild sea.

It was a terrible storm. My grandfather said he had never known such a storm since he came to live on the island, more than forty years before.

Many ships went down in the storm that day, and many lives were lost. But in the very midst of it, when the wind was highest, and the waves were strongest, and when the foam and the spray had completely covered the lighthouse windows, I, Alick Fergusson, was born.

I was born on a strange day, and I was born into a strange home. The lighthouse stood on an island, four miles distant from any land. The island was not very large; if you stood in the middle of it, you could see the sea all round you—that sea which was sometimes so blue and peaceful, and at other times was as black as ink, and roaring and thundering on the rocky shores of the little island. At one side of the island, on a steep rock overhanging the sea, stood the lighthouse. Night by night as soon as it began to grow dark the lighthouse lamps were lighted.

I can remember how I used to admire those lights as a child. I would sit for hours watching them revolve and change in colour. First, there was a white light, then a blue one, then a red one, then a green one—then a white one again. And, as the ships went by, they always kept a look-out for our friendly lights, and avoided the rocks of which they warned them.

My grandfather, old Sandy Fergusson, was one of the lighthouse men, whose duty it was always to keep these lamps in order and to light them every night. He was a clever, active old man, and did his work well and cheerfully. His great desire was to be able to hold on at his post till I should be able to take his place.

At the time when my story begins I was nearly twelve years old, and daily growing taller and stronger. My grandfather was very proud of me, and said I should soon be a young man, and then he should get me appointed in his place to look after the lighthouse.

I was very fond of my strange home, and would not have changed it for any other. Many people would have thought it dull, for we seldom saw a strange face, and the lighthouse men were only allowed to go on shore for a few hours once in every two months. But I was very happy, and thought there was no place in the world like our little island.