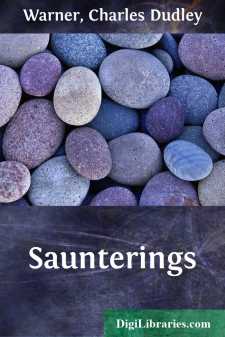 I should not like to ask an indulgent and idle public to saunter about with me under a misapprehension. It would be more agreeable to invite it to go nowhere than somewhere; for almost every one has been somewhere, and has written about it. The only compromise I can suggest is, that we shall go somewhere, and not learn anything about it. The instinct of the public against any thing like information in a volume of this kind is perfectly justifiable; and the reader will perhaps discover that this is illy adapted for a text-book in schools, or for the use of competitive candidates in the civil-service examinations.

Years ago, people used to saunter over the Atlantic, and spend weeks in filling journals with their monotonous emotions. That is all changed now, and there is a misapprehension that the Atlantic has been practically subdued; but no one ever gets beyond the "rolling forties" without having this impression corrected.

I confess to have been deceived about this Atlantic, the roughest and windiest of oceans. If you look at it on the map, it does n't appear to be much, and, indeed, it is spoken of as a ferry. What with the eight and nine days' passages over it, and the laying of the cable, which annihilates distance, I had the impression that its tedious three thousand and odd miles had been, somehow, partly done away with; but they are all there. When one has sailed a thousand miles due east and finds that he is then nowhere in particular, but is still out, pitching about on an uneasy sea, under an inconstant sky, and that a thousand miles more will not make any perceptible change, he begins to have some conception of the unconquerable ocean. Columbus rises in my estimation.

I was feeling uncomfortable that nothing had been done for the memory of Christopher Columbus, when I heard some months ago that thirty-seven guns had been fired off for him in Boston. It is to be hoped that they were some satisfaction to him. They were discharged by countrymen of his, who are justly proud that he should have been able, after a search of only a few weeks, to find a land where the hand-organ had never been heard. The Italians, as a people, have not profited much by this discovery; not so much, indeed, as the Spaniards, who got a reputation by it which even now gilds their decay. That Columbus was born in Genoa entitles the Italians to celebrate the great achievement of his life; though why they should discharge exactly thirty-seven guns I do not know. Columbus did not discover the United States: that we partly found ourselves, and partly bought, and gouged the Mexicans out of. He did not even appear to know that there was a continent here. He discovered the West Indies, which he thought were the East; and ten guns would be enough for them. It is probable that he did open the way to the discovery of the New World. If he had waited, however, somebody else would have discovered it,—perhaps some Englishman; and then we might have been spared all the old French and Spanish wars....