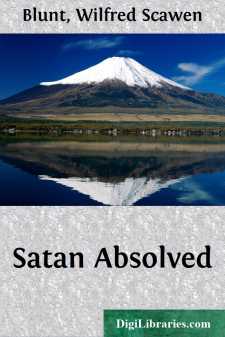 In publishing this poem, the Author feels that some apology is needed. It deals with matters of a kind not usually treated in modern verse, and which ask to be approached, if at all, with dignity and reverence. He trusts that he will not be found lacking on this essential point. Nevertheless, he cannot expect but that he may wound by his plain speaking the feelings of those among his readers who sincerely believe that Nineteenth Century Civilisation is synonymous with Christianity, and that the English Race, above all those in existence, has a special mission from Heaven to subdue and occupy the Earth. The self-complacency of the Author’s countrymen on this head is too deeply seated to be attacked without offence. He has not, however, shrunk from so attacking, and from insisting on the truth that the hypocrisy and all-acquiring greed of modern England is an atrocious spectacle—one which, if there be any justice in Heaven, must bring a curse from God, as it has surely already made the angels weep. The destruction of beauty in the name of science, the destruction of happiness in the name of progress, the destruction of reverence in the name of religion, these are the pharisaic crimes of all the white races; but there is something in the Anglo-Saxon impiety crueller still: that it also destroys, as no other race does, for its mere vain-glorious pleasure. The Anglo-Saxon alone has in our day exterminated, root and branch, whole tribes of mankind. He alone has depopulated continents, species after species, of their wonderful animal life, and is still yearly destroying; and this not merely to occupy the land, for it lies in large part empty, but for his insatiable lust of violent adventure, to make record bags and kill. That things are so is ample reason for the hardest words the Author can command.

To his fellow poets and poetic critics the Author too would say a word. He has chosen as the vehicle of his thought a metre to which in English they are unaccustomed, the six-foot Alexandrine couplet. For some reason which the Author has never understood, this, the classic metre in France, has stood in disrepute with us. Yet he ventures to think that, for rhetorical and dramatic purposes, it is infinitely preferable to our own heroic couplet, and preferable even, in any hands but the strongest, to our traditional blank verse. He believes, moreover, that if our skilled dramatists would make trial of it, it would, by its extreme flexibility and the natural break of its cesura, enable them to capture that shyest of all shy things—success in a rhymed modern play. At least, he trusts that they will give it their consideration, and not condemn him off-hand because, having a rhetorical subject to deal with, he has treated it rhetorically and in what he considers the best rhetoric form, though both rhetoric and Alexandrines are out of fashion.

Lastly, he has to discharge, in connection with his poem, a double debt of gratitude. The poem, unworthy as it is, is, by permission, dedicated to the first of living thinkers, Mr....