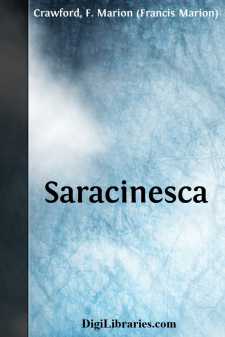 In the year 1865 Rome was still in a great measure its old self. It had not then acquired that modern air which is now beginning to pervade it. The Corso had not been widened and whitewashed; the Villa Aldobrandini had not been cut through to make the Via Nazionale; the south wing of the Palazzo Colonna still looked upon a narrow lane through which men hesitated to pass after dark; the Tiber's course had not then been corrected below the Farnesina; the Farnesina itself was but just under repair; the iron bridge at the Ripetta was not dreamed of; and the Prati di Castello were still, as their name implies, a series of waste meadows. At the southern extremity of the city, the space between the fountain of Moses and the newly erected railway station, running past the Baths of Diocletian, was still an exercising-ground for the French cavalry. Even the people in the streets then presented an appearance very different from that which is now observed by the visitors and foreigners who come to Rome in the winter. French dragoons and hussars, French infantry and French officers, were everywhere to be seen in great numbers, mingled with a goodly sprinkling of the Papal Zouaves, whose grey Turco uniforms with bright red facings, red sashes, and short yellow gaiters, gave colour to any crowd. A fine corps of men they were, too; counting hundreds of gentlemen in their ranks, and officered by some of the best blood in France and Austria. In those days also were to be seen the great coaches of the cardinals, with their gorgeous footmen and magnificent black horses, the huge red umbrellas lying upon the top, while from the open windows the stately princes of the Church from time to time returned the salutations of the pedestrians in the street. And often in the afternoon there was heard the tramp of horse as a detachment of the noble guards trotted down the Corso on their great chargers, escorting the holy Father himself, while all who met him dropped upon one knee and uncovered their heads to receive the benediction of the mild-eyed old man with the beautiful features, the head of Church and State. Many a time, too, Pius IX. would descend from his coach and walk upon the Pincio, all clothed in white, stopping sometimes to talk with those who accompanied him, or to lay his gentle hand on the fair curls of some little English child that paused from its play in awe and admiration as the Pope went by. For he loved children well, and most of all, children with golden hair—angels, not Angles, as Gregory said.

As for the fashions of those days, it is probable that most of us would suffer severe penalties rather than return to them, beautiful as they then appeared to us by contrast with the exaggerated crinoline and flower-garden bonnet, which had given way to the somewhat milder form of hoop-skirt madness, but had not yet flown to the opposite extreme in the invention of the close-fitting princesse garments of 1868. But, to each other, people looked then as they look now....