Samantha on the Woman Question 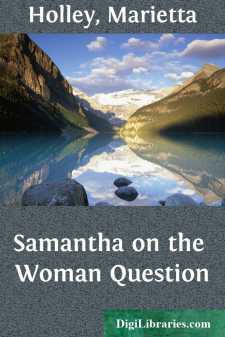 "SHE WANTED HER RIGHTS"

Lorinda Cagwin invited Josiah and me to a reunion of the Allen family at her home nigh Washington, D.C., the birthplace of the first Allen we knowed anything about, and Josiah said:

"Bein' one of the best lookin' and influential Allens on earth now, it would be expected on him to attend to it."

And I fell in with the idee, partly to be done as I would be done by if it wuz the relation on my side, and partly because by goin' I could hit two birds with one stun, as the poet sez. Indeed, I could hit four on 'em.

My own cousin, Diantha Trimble, lived in a city nigh Lorinda's and I had promised to visit her if I wuz ever nigh her, and help bear her burdens for a spell, of which burden more anon and bom-by.

Diantha wuz one bird, the Reunion another, and the third bird I had in my mind's eye wuz the big outdoor meeting of the suffragists that wuz to be held in the city where Diantha lived, only a little ways from Lorinda's.

And the fourth bird and the biggest one I wuz aimin' to hit from this tower of ourn wuz Washington, D.C. I wanted to visit the Capitol of our country, the center of our great civilization that stands like the sun in the solar system, sendin' out beams of power and wisdom and law and order, and justice and injustice, and money and oratory, and talk and talk, and wind and everything, to the uttermost points of our vast possessions, and from them clear to the ends of the earth. I wanted to see it, I wanted to like a dog. So we laid out to go.

[Illustration: "I wanted to visit the Capitol of our country…. So we laid out to go."]

Lorinda lived on the old Allen place, and I always sot store by her, and her girl, Polly, wuz, as Thomas J. said, a peach. She had spent one of her college vacations with us, and a sweeter, prettier, brighter girl I don't want to see. Her name is Pauline, but everybody calls her Polly.

The Cagwins are rich, and Polly had every advantage money could give, and old Mom Nater gin her a lot of advantages money couldn't buy, beauty and intellect, a big generous heart and charm. And you know the Cagwins couldn't bought that at no price. Charm in a girl is like the perfume in a rose, and can't be bought or sold. And you can't handle or describe either on 'em exactly. But what a influence they have; how they lay holt of your heart and fancy.

Royal Gray, the young man who wuz payin' attention to her, stopped once for a day or two in Jonesville with Polly and her Ma on their way to the Cagwins' camp in the Adirondacks. And we all liked him so well that we agreed in givin' him this extraordinary praise, we said he wuz worthy of Polly, we knowed of course that wuz the highest enconium possible for us to give.

Good lookin', smart as a whip, and deep, you could see that by lookin' into his eyes, half laughin' and half serious eyes and kinder sad lookin' too under the fun, as eyes must be in this world of ourn if they look back fur, or ahead much of any. A queer world this is, and kinder sad and mysterious, behind all the good and glory on't....