Samantha at the St. Louis Exposition 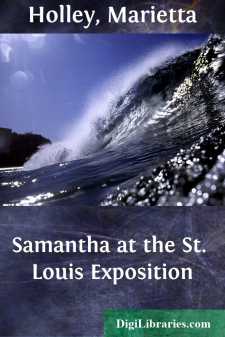 I had noticed for some time that Josiah Allen had acted queer. He would seem lost in thought anon or oftener, and then seemin'ly roust himself up and try to act natural.

And anon he would drag his old tin chest out from under the back stairway and pour over musty old deeds and papers, drawed up by his great-grandpa mebby.

He did this last act so often that I said to him one day, "What under the sun do you find in them yeller old papers to attract you so, Josiah?"

But he looked queer at me, queer as a dog, as if he wuz lookin' through me to some distant view that interested him dretfully, and answered evasive, and mebby he wouldn't answer at all.

And then I'd see him and Uncle Sime Bentley, his particular chum, with their heads clost together, seemin'ly plottin' sunthin' or ruther, though what it wuz I couldn't imagine.

And then they would bend their heads eagerly over the daily papers, and more'n once Josiah got down our old Olney's Atlas and he and Uncle Sime would pour over it and whisper, though what it wuz about I couldn't imagine. And if I'd had the curosity of some wimmen it would drove me into a caniption fit.

And more'n a dozen times I see him and Uncle Sime down by the back paster on the creek pacin' to and fro as if they wuz measurin' land. And most of all they seemed to be measurin' off solemn like and important the lane from the creek lot up to the house and takin' measurements, as queer lookin' sights as I ever see, and then they would consult the papers and atlas agin, and whisper and act.

And about this time he begun to talk to me about the St. Louis Exposition. He opened the subject one day by remarkin' that he spozed I had never hearn of the Louisana Purchase. He said that the minds of females in their leisure hours bein' took up by more frivolous things, such as tattin' and crazy bed-quilts, he spozed that I, bein' a female woman, had never hearn on't.

And my mind bein' at that time took up in startin' the seams in a blue and white sock I wuz knittin' for him, didn't reply, and he went on and talked and talked about it.

But good land! I knowed all about the Louisana Purchase; I knowed it come into our hands in 1803, that immense tract of land, settlin' forever in our favor the war for supremacy on this continent between ourselves and England, and givin' us the broad highway of the Mississippi to sail to and fro on which had been denied us, besides the enormous future increase in our wealth and population.

I knowed that between 1700 and 1800 this tract wuz tossted back and forth between France and Spain and England some as if it wuz a immense atlas containing pictured earth and sea instead of the real land and water.

It passed backwards and forwards through the century till 1803 when it bein' at the time in the hands of France, we bought it of Napoleon Bonaparte who had got possession of it a few years before, and Heaven only knows what ambitious dreams of foundin' a new empire in a new France filled that powerful brain, under that queer three-cornered hat of hisen when he got it of Spain....