Samantha at Coney Island and a Thousand Other Islands 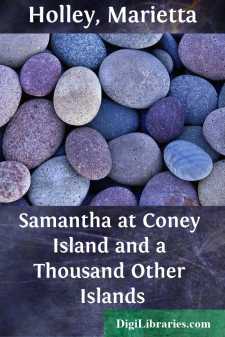 IN WHICH THE CONEY ISLAND MICROBEENTERS OUR QUIET HOME

When Serenus Gowdey got back last fall from Brooklyn, where his twin brother, Sylvester, lives, he couldn’t talk about anything but Coney Island. He slighted religion, stopped runnin’ down relations, politics wuz left in the lurch, and cows, hens, and crops, wuz to him as if they wuzn’t. He acted crazy as a loon about that Island.

Why, Sylvester’ses wife told Miss Dagget and she told the Editor of the Augur’s wife, and she told Ben Lowry’s widder, and she told the Editor of the Gimlet’s mother-in-law, and she told me. It come straight, that Serenus only stayed there nights and to a early breakfast, but spent his hull durin’ time to Coney Island, and he a twin too. She said Sylvester felt so hurt she wuz afraid it would make a lastin’ hardness. And it made me enough trouble too, yes indeed! for he would come and pour out his praises of that frisky, frivolous spot into Josiah’s too willin’ ears, till he got him as wild as he wuz about it.

Why, evenin’s after he’d been there recountin’ its attractions till bed-time, Josiah would be so wrought up he’d ride night mairs most all night. He’d spring up in bed cryin’ out, “All aboard for Coney Island!” or, “There is the Immoral Railway! See the divin’ girls, and the Awful Tower. Get a hot dog; look at the alligators, etc., etc.” I gin him catnip to soothe his nerve, but that didn’t git the pizen out of his system; no, acres of catnip couldn’t.

Oh, how dead sick I’d git of their talk, Coney Island! Luna Park! Well named, I’d say to myself, it is enough to make anybody luny to hear so much about it. Steeple Chase! chasin’ steeples, folly and madness. Dreamland! night mairs, most probable. Why, from Serenus’ talk that I hearn onwillingly about toboggan slides, merry-go-rounds, swings, immoral railways, skatin’ rinks, diving girls, loops de loops, and bumps de bumps, trips to the moon and trashy shows of all kinds I got the idee there wuzn’t nothin’ there God had made, only the Ocean and the little incubator babies, though them two shows wuzn’t what you might call similar and the same size. Why, I myself, with my powerful mind, would git so cumfuddled hearin’ his wild and glarin’ descriptions, that my brain would seem to turn over under my foretop, and I didn’t wonder at Josiah’s bein’ led away by it, much as I lamented it, for he soon declared that go there he would.

In vain I reminded him that he wuz a deacon and a grand-father. He said he didn’t care how many deacons he wuz, or how many grand-fathers; he wuz goin’ to see that beautiful and entrancin’ place with his own eyes. I tried to quell him down, but couldn’t quell him worth a cent, with Serenus firin’ him up on the other side.

One Sunday, Elder Minkley preached an eloquent sermon describing the glories of the New Jerusalem, and Josiah said goin’ home that from Serenus’ tell, the elder had gin a crackin’ good description of Coney Island....