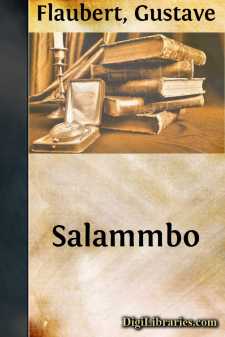 CHAPTER I THE FEAST

It was at Megara, a suburb of Carthage, in the gardens of Hamilcar. The soldiers whom he had commanded in Sicily were having a great feast to celebrate the anniversary of the battle of Eryx, and as the master was away, and they were numerous, they ate and drank with perfect freedom.

The captains, who wore bronze cothurni, had placed themselves in the central path, beneath a gold-fringed purple awning, which reached from the wall of the stables to the first terrace of the palace; the common soldiers were scattered beneath the trees, where numerous flat-roofed buildings might be seen, wine-presses, cellars, storehouses, bakeries, and arsenals, with a court for elephants, dens for wild beasts, and a prison for slaves.

Fig-trees surrounded the kitchens; a wood of sycamores stretched away to meet masses of verdure, where the pomegranate shone amid the white tufts of the cotton-plant; vines, grape-laden, grew up into the branches of the pines; a field of roses bloomed beneath the plane-trees; here and there lilies rocked upon the turf; the paths were strewn with black sand mingled with powdered coral, and in the centre the avenue of cypress formed, as it were, a double colonnade of green obelisks from one extremity to the other.

Far in the background stood the palace, built of yellow mottled Numidian marble, broad courses supporting its four terraced stories. With its large, straight, ebony staircase, bearing the prow of a vanquished galley at the corners of every step, its red doors quartered with black crosses, its brass gratings protecting it from scorpions below, and its trellises of gilded rods closing the apertures above, it seemed to the soldiers in its haughty opulence as solemn and impenetrable as the face of Hamilcar.

The Council had appointed his house for the holding of this feast; the convalescents lying in the temple of Eschmoun had set out at daybreak and dragged themselves thither on their crutches. Every minute others were arriving. They poured in ceaselessly by every path like torrents rushing into a lake; through the trees the slaves of the kitchens might be seen running scared and half-naked; the gazelles fled bleating on the lawns; the sun was setting, and the perfume of citron trees rendered the exhalation from the perspiring crowd heavier still.

Men of all nations were there, Ligurians, Lusitanians, Balearians, Negroes, and fugitives from Rome. Beside the heavy Dorian dialect were audible the resonant Celtic syllables rattling like chariots of war, while Ionian terminations conflicted with consonants of the desert as harsh as the jackal's cry. The Greek might be recognised by his slender figure, the Egyptian by his elevated shoulders, the Cantabrian by his broad calves. There were Carians proudly nodding their helmet plumes, Cappadocian archers displaying large flowers painted on their bodies with the juice of herbs, and a few Lydians in women's robes, dining in slippers and earrings. Others were ostentatiously daubed with vermilion, and resembled coral statues....