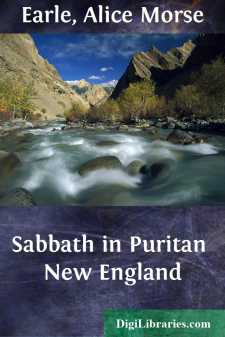 When the Pilgrim Fathers landed at Plymouth they at once assigned a Lord's Day meeting-place for the Separatist church,--"a timber fort both strong and comely, with flat roof and battlements;" and to this fort, every Sunday, the men and women walked reverently, three in a row, and in it they worshipped until they built for themselves a meeting-house in 1648.

As soon as each successive outlying settlement was located and established, the new community built a house for the purpose of assembling therein for the public worship of God; this house was called a meeting-house. Cotton Mather said distinctly that he "found no just ground in Scripture to apply such a trope as church to a house for public assembly." The church, in the Puritan's way of thinking, worshipped in the meeting-house, and he was as bitterly opposed to calling this edifice a church as he was to calling the Sabbath Sunday. His favorite term for that day was the Lord's Day.

The settlers were eager and glad to build their meeting-houses; for these houses of God were to them the visible sign of the establishment of that theocracy which they had left their fair homes and had come to New England to create and perpetuate. But lest some future settlements should be slow or indifferent about doing their duty promptly, it was enacted in 1675 that a meeting-house should be erected in every town in the colony; and if the people failed to do so at once, the magistrates were empowered to build it, and to charge the cost of its erection to the town. The number of members necessary to establish a separate church was very distinctly given in the Platform of Church Discipline: "A church ought not to be of greater number than can ordinarilie meet convenientlie in one place, nor ordinarilie fewer than may convenientlie carry on church-work." Each church was quite independent in its work and government, and had absolute power to admit, expel, control, and censure its members.

These first meeting-houses were simple buildings enough,--square log-houses with clay-filled chinks, surmounted by steep roofs thatched with long straw or grass, and often with only the beaten earth for a floor. It was considered a great advance and a matter of proper pride when the settlers had the meeting-house "lathed on the inside, and so daubed and whitened over workmanlike." The dimensions of many of these first essays at church architecture are known to us, and lowly little structures they were. One, indeed, is preserved for us under cover at Salem. The first meeting-house in Dedham was thirty-six feet long, twenty feet wide, and twelve feet high "in the stud;" the one in Medford was smaller still; and the Haverhill edifice was only twenty-six feet long and twenty wide, yet "none other than the house of God."

As the colonists grew in wealth and numbers, they desired and built better sanctuaries, "good roomthy meeting-houses" they were called by Judge Sewall, the most valued and most interesting journal-keeper of the times. The rude early buildings were then converted into granaries or storehouses, or, as was the Pentucket meeting-house, into a "house of shelter or a house to sett horses in." As these meeting-houses had not been consecrated, and as they were town-halls, forts, or court-houses as well as meeting-houses, the humbler uses to which they were finally put were not regarded as profanations of holy places....