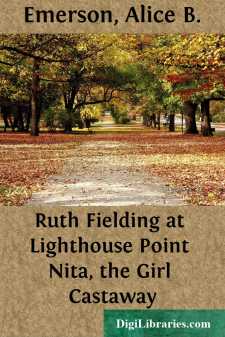 A brown dusk filled the long room, for although the windows were shrouded thickly and no lamp burned, some small ray of light percolated from without and made dimly visible the outlines of the company there gathered.

The low, quavering notes of an organ sighed through the place. There was the rustle and movement of a crowd. To the neophyte, who had been brought into the hall with eyes bandaged, it all seemed very mysterious and awe-inspiring.

Now she was set in a raised place and felt that before her was the company of masked and shrouded figures, in scarlet dominoes like those worn by the two guards who had brought her from the anteroom. The bandage was whisked from her eyes; but she could see nothing of her surroundings, nor of the company before which she stood.

“Candidate!” spoke a hollow, mysterious voice somewhere in the gloom, yet sounding so close to her ear that she started. “Candidate! you stand before the membership body of the S. B.’s. You are as yet unknown to them and they unknown to you. If you enter the secret association of the S. B.’s you must throw off and despise forever all ties of a like character. Do you agree?”

The candidate obeyed, in so far as she prodded her sharply in the ribs and a shrill voice whispered: “Say you do–gump!”

The candidate obeyed, in so far as she proclaimed that she did, at least.

“It is an oath,” went on the sepulchral voice. “Remember!”

In chorus the assembly immediately repeated, “Remember!” in solemn tones.

“Candidate!” repeated the leading voice, “you have been taught the leading object of our existence as a society. What is it?”

“It is right. And now, what do our initials stand for?”

“Sweetbriar,” replied the shaking voice of the candidate.

“True. That is what our initials stand for to the world at large–to those who are not initiated into the mysteries of the S. B.’s. But those letters may stand for many things and it is my privilege to explain to you now that they likewise are to remind us all of two virtues that each Sweetbriar is expected to practice–to be sincere and to befriend. Remember! Sincerity–Befriend. Remember!”

“And now let the light shine upon the face of the candidate, that the Shrouded Sisterhood may know her where’er they meet her. Once! Twice! Thrice! Light!”

At the cry the ray of a spot-light flashed out of the gloom at the far end of the long room and played glaringly upon the face and figure of the candidate. She herself was more blinded by the glare than she had been by the bandage. There was a rustle and movement in the room, and the leading voice went on:

“Sisters! the novice is now revealed to us all. She has now entered into the outer circle of the Sweetbriars. Let her know us, where’er she meets us, by our rallying cry. Once! Twice! Thrice! Now!”

Instantly, and in unison, the members chanted the following “yell”:

This be our battle-cry–

With the final word the spot-light winked out and the other lights of the hall flashed on. The assembly of hooded and shrouded figures were revealed. And Helen Cameron, half smiling and half crying, found herself standing upon the platform before her schoolmates who had already joined the secret fraternity known as “The Sweetbriars.”

Beside her, and presiding over the meeting, she found her oldest and dearest friend at Briarwood Hall–Ruth Fielding. A small megaphone stood upon the table at Ruth’s hand, and its use had precluded Helen’s recognition of her chum’s voice as the latter led in the ritual of the fraternity....