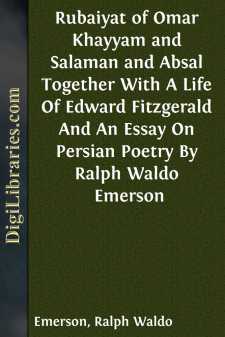 Old Fitz, who from your suburb grangeWhere once I tarried for a while,Glance at the wheeling Orb of changeAnd greet it with a kindly smile;Whom yet I see, as there you sitBeneath your sheltering garden tree,And watch your doves about you flitAnd plant on shoulder, hand and knee,Or on your head their rosy feet,As if they knew your diet sparesWhatever moved in that full sheetLet down to Peter at his prayers;

But none can sayThat Lenten fare makes Lenten thought,Who reads your golden Eastern lay,Than which I know no version doneIn English more divinely well;A planet equal to the sun;Which cast it, that large infidelYour Omar: and your Omar drewFull-handed plaudits from our bestIn modern letters....

Edward FitzGerald was born in the year 1809, at Bredfield House, near Woodbridge, Suffolk, being the third son of John Purcell, who, subsequently to his marriage with a Miss FitzGerald, assumed the name and arms proper to his wife’s family.

St. Germain and Paris were in turn the home of his earlier years, but in 1821, he was sent to the Grammar School at Bury St. Edmunds. During his stay in that ancient foundation he was the fellow pupil of James Spedding and J. M. Kemble. From there he went in 1826 to Trinity College, Cambridge, where he made the acquaintance of W. M. Thackeray and others of only less note. His school and college friendships were destined to prove lasting, as were, also, all those he was yet to form.

One of FitzGerald’s chief characteristics was what might almost be called a genius for friendship. He did not, indeed, wear his heart upon his sleeve, but ties once formed were never unloosed by any failure in charitable and tender affection on his part. Never, throughout a lengthy life, did irritability and erratic petulance (displayed ’tis true, at times by the translator of “that large infidel”), darken the eyes of those he honoured with his friendship to the simple and whole-hearted genuineness of the man.

From Oxford, FitzGerald retired to the ‘suburb grange’ at Woodbridge, referred to by Tennyson. Here, narrowing his bodily wants to within the limits of a Pythagorean fare, he led a life of a truly simple type surrounded by books and roses, and, as ever, by a few firm friends. Annual visits to London in the months of Spring kept alive the alliances of earlier days, and secured for him yet other intimates, notably the Tennyson brothers.

Amongst the languages, Spanish seems to have been his earlier love. His translation of Calderon, due to obedience to the guiding impulse of Professor Cowell, showed him to the world as a master of the rarest of arts, that of conveying to an English audience the lights and shades of a poem first fashioned in a foreign tongue.

At the bidding of the same mentor, he, later, turned his attention to Persian, the first fruits of his toil being an anonymous version, in Miltonic verse, of the ‘Salámán and Absál’ of Jámi....