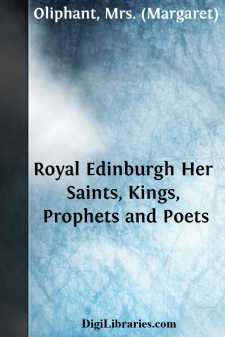 MARGARET OF SCOTLAND, ATHELING—QUEEN AND SAINT

It is strange yet scarcely difficult to the imagination to realise the first embodiment of what is now Edinburgh in the far distance of the early ages. Neither Pict nor Scot has left any record of what was going on so far south in the days when the king's daughters, primitive princesses with their rude surroundings, were placed for safety in the castrum puellarum, the maiden castle, a title in after days proudly (but perhaps not very justly) adapted to the supposed invulnerability of the fortress perched upon its rock. Very nearly invulnerable, however, it must have been in the days before artillery; too much so at least for one shut-up princess, who complained of her lofty prison as a place without verdure. If we may believe, notwithstanding the protest of that much-deceived antiquary the Laird of Monkbarns, that these fair and forlorn ladies were the first royal inhabitants of the Castle of Edinburgh, we may imagine that they watched from their battlements more wistfully than fearfully, over all the wide plain, what dust might rise or spears might gleam, or whether any galley might be visible of reiver or rescuer from the north. A little collection of huts or rude forts here and there would be all that broke the sweeping line of Lothian to the east or west, and all that width of landscape would lie under the eyes of the watchers, giving long notice of the approach of any enemies. "Out over the Forth I look to the north," the maidens might sing, looking across to Dunfermline, where already there was some royal state, or towards the faint lines of mountains in the distance, over the soft swelling heights of the Lomonds. No doubt Edinburgh, Edwinesburgh, or whatever the antiquaries imagine it to have been, must have been sadly dull if safe, suspended high upon the rock, nearer heaven than earth. It is curious to hear that it was "without verdure"; but perhaps the young ladies took no account of the trees that clothed the precipices below them, or the greenness that edged the Nor' Loch deep at their feet, but sighed for the gardens and luxuriance of Dunfermline, where all was green about their windows and the winding pathways of the dell of Pittendreich would be pleasant to wander in. This first romantic aspect of the Castle of Edinburgh is, however, merely traditional, and the first real and authentic appearance of the old fortress and city in history is in the record, at once a sacred legend and a valuable historical chronicle, of the life of Margaret the Atheling, the first of several Queen Margarets, the woman saint and blessed patroness of Scotland, who has bequeathed not only many benefits and foundations of after good to her adopted country, but her name—perhaps among Scotswomen still the most common of all Christian names.

No more moving and delightful story was ever written or invented than the history of this saint and Queen. She was the daughter of Edward, called the Outlaw, and of his wife a princess of Hungary, of the race which afterwards produced St....