Roundabout to Boston (from Literary Friends and Acquaintance) 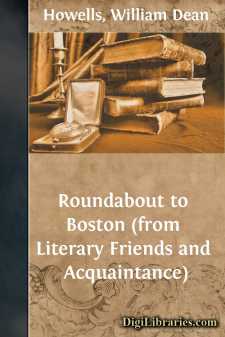 During the four years of my life in Venice the literary intention was present with me at all times and in all places. I wrote many things in verse, which I sent to the magazines in every part of the English-speaking world, but they came unerringly back to me, except in three instances only, when they were kept by the editors who finally printed them. One of these pieces was published in the Atlantic Monthly; another in Harpers Magazine; the third was got into the New York Ledger through the kindness of Doctor Edward Everett Hale, who used I know not what mighty magic to that end. I had not yet met him; but he interested himself in my ballad as if it had been his own. His brother, Charles Hale, later Consul-General for Egypt, whom I saw almost every moment of the two visits he paid Venice in my time, had sent it to him, after copying it in his own large, fair hand, so that it could be read. He was not quite of that literary Boston which I so fondly remembered my glimpses of; he was rather of a journalistic and literary Boston which I had never known; but he was of Boston, after all. He had been in Lowell's classes at Harvard; he had often met Longfellow in Cambridge; he knew Doctor Holmes, of course; and he let me talk of my idols to my heart's content. I think he must have been amused by my raptures; most people would have been; but he was kind and patient, and he listened to me with a sweet intelligence which I shall always gratefully remember. He died too young, with his life's possibilities mainly unfulfilled; but none who knew him could fail to imagine them, or to love him for what he was.

Besides those few pitiful successes, I had nothing but defeats in the sort of literature which I supposed was to be my calling, and the defeats threw me upon prose; for some sort of literary thing, if not one, then another, I must do if I lived; and I began to write those studies of Venetian life which afterwards became a book, and which I contributed as letters to the 'Boston Advertiser', after vainly offering them to more aesthetic periodicals. However, I do not imagine that it was a very smiling time for any literary endeavorer at home in the life-and-death civil war then waging. Some few young men arose who made themselves heard amid the din of arms even as far as Venice, but most of these were hushed long ago. I fancy Theodore Winthrop, who began to speak, as it were, from his soldier's grave, so soon did his death follow the earliest recognition by the public, and so many were his posthumous works, was chief of these; but there were others whom the present readers must make greater effort to remember. Forceythe Willson, who wrote The Old Sergeant, became known for the rare quality of his poetry; and now and then there came a poem from Aldrich, or Stedman, or Stoddard. The great new series of the 'Biglow Papers' gathered volume with the force they had from the beginning. The Autocrat was often in the pages of the Atlantic, where one often found Whittier and Emerson, with many a fresh name now faded. In Washington the Piatts were writing some of the most beautiful verse of the war, and Brownell was sounding his battle lyrics like so many trumpet blasts. The fiction which followed the war was yet all to come. Whatever was done in any kind had some hint of the war in it, inevitably; though in the very heart of it Longfellow was setting about his great version of Dante peacefully, prayerfully, as he has told in the noble sonnets which register the mood of his undertaking.

At Venice, if I was beyond the range of literary recognition I was in direct relations with one of our greatest literary men, who was again of that literary Boston which mainly represented American literature to me. The official chief of the consul at Venice was the United States Minister at Vienna, and in my time this minister was John Lothrop Motley, the historian. He was removed, later, by that Johnson administration which followed Lincoln's so forgottenly that I name it with a sense of something almost prehistoric. Among its worst errors was the attempted discredit of a man who had given lustre to our name by his work, and who was an ardent patriot as well as accomplished scholar. He visited Venice during my first year, which was the darkest period of the civil war, and I remember with what instant security, not to say severity, he rebuked my scarcely whispered misgivings of the end, when I ventured to ask him what he thought it would be. Austria had never recognized the Secessionists as belligerents, and in the complications with France and England there was little for our minister but to share the home indignation at the sympathy of those powers with the South....