Round-about Rambles in Lands of Fact and Fancy 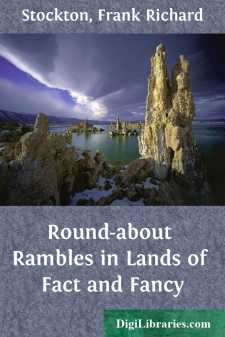 WINTER IN THE WOODS

What can be more delightful, to a boy of spirit, than a day in the woods when there has been a good snow! If he also happens to have a good friend or two, and some good dogs (who are just as likely to be friends as his boy-companions), he ought to be much happier than an ordinary king. A forest is a fine place at any time, but when the ground is well covered with snow—especially if there is a hard crust upon it—the woods seem to possess a peculiar charm. You can go anywhere then.

In the summer, the thick undergrowth, the intertwining vines, and the heavy lower branches of the trees, make it difficult even to see into the dark recesses of the forest. But in the winter all is open. The low wet places, the deep holes, the rotten bogs, everything on the ground that is in the way of a good run and a jump, is covered up. You do not walk a hundred yards under the bare branches of the trees before up starts a rabbit, or a hare, if you would rather call him by his right name,—and away go the dogs, and away you go—all of you tearing along at the top of your speed!

But poor Bunny has a small chance, when a hard snow is on the ground. His hiding-places are all covered up, and before he knows it the dogs have caught him, and your mother will have stewed rabbit for supper. It seems a hard fate for the poor little fellow, but he was born partly for that purpose.

When you have caught your rabbit, and come back to where the men are cutting wood, you will be just as proud to tell the boy who is cutting up the branches all about your splendid hunt, as if you had chased and killed a stag.

"There's where we started him!" you will cry, "and away he scudded, over there among the chestnuts, and Rover right at his heels, and when we got down there to the creek, Rover turned heels-over-head on the ice, he was going so fast; but I gave one slide right across, and just up there, by the big walnut, the other two dogs got him!"

That boy is almost as much excited as you are, and he would drop his axe in one minute, and be off with you on another chase, if his father were not there.

And now you find that you have reached the wood-cutters exactly in time, for that great tree is just about to come down.

There go the top-branches, moving slowly along through the tops of the other trees, and now they move faster, and everything begins to crack; and, with a rush and a clatter of breaking limbs, the great oak comes crashing down; jarring the very earth beneath your feet, and making the snow fly about like a sparkling cloud, while away run the dogs, with their tails between their legs.

The tree is down now, and you will want to be home in time for dinner. Farmer Brown's sled has just passed, and if you will cut across the woods you can catch up with him, and have a ride home, and tell him all about the rabbit-hunt, on the way.

If it is Saturday, and a holiday, you will be out again this afternoon, with some of the other boys, perhaps, and have a grand hunt.

Suppose it is snowing, what will you care? You will not mind the snow any more than if it were a shower of blossoms from the apple-trees in May.

There is nothing more straightforward in its ways than light—when we let it alone. But, like many of us, when it is introduced to the inventions and contrivances of the civilized world, it often becomes exceedingly fond of vagaries and extravagances....