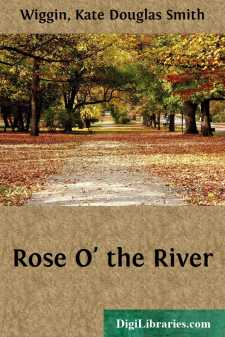 THE PINE AND THE ROSE

It was not long after sunrise, and Stephen Waterman, fresh from his dip in the river, had scrambled up the hillside from the hut in the alder-bushes where he had made his morning toilet.

An early ablution of this sort was not the custom of the farmers along the banks of the Saco, but the Waterman house was hardly a stoneвЂ™s throw from the water, and there was a clear, deep swimming-hole in the Willow Cove that would have tempted the busiest man, or the least cleanly, in York County. Then, too, Stephen was a child of the river, born, reared, schooled on its very brink, never happy unless he were on it, or in it, or beside it, or at least within sight or sound of it.

The immensity of the sea had always silenced and overawed him, left him cold in feeling. The river wooed him, caressed him, won his heart. It was just big enough to love. It was full of charms and changes, of varying moods and sudden surprises. Its voice stole in upon his ear with a melody far sweeter and more subtle than the boom of the ocean. Yet it was not without strength, and when it was swollen with the freshets of the spring and brimming with the bounty of its sister streams, it could dash and roar, boom and crash, with the best of them.

Stephen stood on the side porch, drinking in the glory of the sunrise, with the Saco winding like a silver ribbon through the sweet loveliness of the summer landscape.

And the river rolled on toward the sea, singing its morning song, creating and nourishing beauty at every step of its onward path. Cradled in the heart of a great mountain-range, it pursued its gleaming way, here lying silent in glassy lakes, there rushing into tinkling little falls, foaming great falls, and thundering cataracts. Scores of bridges spanned its width, but no steamers flurried its crystal depths. Here and there a rough little rowboat, tethered to a willow, rocked to and fro in some quiet bend of the shore. Here the silver gleam of a rising perch, chub, or trout caught the eye; there a pickerel lay rigid in the clear water, a fish carved in stone: here eels coiled in the muddy bottom of some pool; and there, under the deep shadows of the rocks, lay fat, sleepy bass, old, and incredibly wise, quite untempted by, and wholly superior to, the rural fishermanвЂ™s worm.

The river lapped the shores of peaceful meadows; it flowed along banks green with maple, beech, sycamore, and birch; it fell tempestuously over dams and fought its way between rocky cliffs crowned with stately firs. It rolled past forests of pine and hemlock and spruce, now gentle, now terrible; for there is said to be an Indian curse upon the Saco, whereby, with every great sun, the child of a paleface shall be drawn into its cruel depths. Lashed into fury by the stony reefs that impeded its progress, the river looked now sapphire, now gold, now white, now leaden gray; but always it was hurrying, hurrying on its appointed way to the sea.

After feasting his eyes and filling his heart with a morning draught of beauty, Stephen went in from the porch and, pausing at the stairway, called in stentorian tones: вЂњGet up and eat your breakfast, Rufus! The boys will be picking the side jams to-day, and IвЂ™m going down to work on the logs. If you come along, bring your own pick-pole and peavey.вЂќ Then, going to the kitchen pantry, he collected, from the various shelves, a pitcher of milk, a loaf of bread, half an apple-pie, and a bowl of blueberries, and, with the easy methods of a household unswayed by feminine rule, moved toward a seat under an apple-tree and took his morning meal in great apparent content. Having finished, and washed his dishes with much more thoroughness than is common to unsuperintended man, and having given Rufus the second call to breakfast with the vigor and acrimony that usually marks that unpleasant performance, he strode to a high point on the river-bank and, shading his eyes with his hand, gazed steadily down stream....