Roosevelt in the Bad Lands 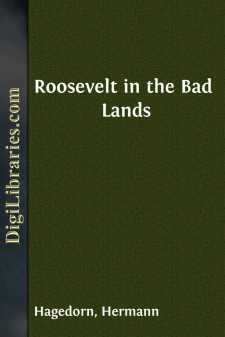 It was still the Wild West in those days, the Far West, the West of Owen Wister's stories and Frederic Remington's drawings, the West of the Indian and the buffalo-hunter, the soldier and the cowpuncher. That land of the West has gone now, "gone, gone with lost Atlantis," gone to the isle of ghosts and of strange dead memories. It was a land of vast silent spaces, of lonely rivers, and of plains where the wild game stared at the passing horseman. It was a land of scattered ranches, of herds of long-horned cattle, and of reckless riders who unmoved looked in the eyes of life or death. In that land we led a free and hardy life, with horse and with rifle. We worked under the scorching midsummer sun, when the wide plains shimmered and wavered in the heat; and we knew the freezing misery of riding night guard round the cattle in the late fall round-up. In the soft springtime the stars were glorious in our eyes each night before we fell asleep; and in the winter we rode through blinding blizzards, when the driven snow-dust burnt our faces. There were monotonous days, as we guided the trail cattle or the beef herds, hour after hour, at the slowest of walks; and minutes or hours teeming with excitement as we stopped stampedes or swam the herds across rivers treacherous with quicksands or brimmed with running ice. We knew toil and hardship and hunger and thirst; and we saw men die violent deaths as they worked among the horses and cattle, or fought in evil feuds with one another; but we felt the beat of hardy life in our veins, and ours was the glory of work and the joy of living.

To write any book is an adventure, but to write this book has been the kind of gay and romantic experience that makes any man who has partaken of it a debtor forever to the Giver of Delights. Historical research, contrary to popular opinion, is one of the most thrilling of occupations, but I question whether any biographer has ever had a better time gathering his material than I have had. Amid the old scenes, the old epic life of the frontier has been re-created for me by the men who were the leading actors in it. But my contact with it has not been only vicarious. In the course of this most grateful of labors I have myself come to know something of the life that Roosevelt knew thirty-five years ago—the hot desolation of noon in the scarred butte country; the magic of dawn and dusk when the long shadows crept across the coulees and woke them to unexpected beauty; the solitude of the prairies, that have the vastness without the malignancy of the sea. I have come to know the thrill and the dust and the cattle-odors of the round-up; the warm companionship of the ranchman's dinner-table; such profanity as I never expect to hear again; singing and yarns and hints of the tragedy of prairie women; and, at the height of a barbecue, the appalling intrusion of death. I have felt in all its potency the spell which the "short-grass country" cast over Theodore Roosevelt; and I cannot hear the word Dakota without feeling a stirring in my blood.

It was Mr. Roosevelt himself who gave me the impulse to write this book, and it was the letters of introduction which he wrote early in 1918 which made it possible for me to secure the friendly interest of the men who knew most about his life on the ranch and the range. "If you want to know what I was like when I had bark on," he said, "you ought to talk to Bill Sewall and Merrifield and Sylvane Ferris and his brother Joe." I was writing a book about him for boys at the time, and again and again he said, "I want you to go out to Dakota!" On one occasion I referred to his life in the Bad Lands as "a kind of idyl." "That's it!" he exclaimed. "That's it! That's exactly what it was!"

The wish he had expressed, living, became in a sense a command after he was dead. The letters he had given me unsealed the lips of the men who, for thirty-five years, had steadily refused to reveal to "newspaper fellers" the intimate story of the romantic life they had shared with the man who became President of the United States. From Dickinson, North Dakota, came Sylvane Ferris; from Terry, Montana, came "Joe" Ferris; from Somers, Montana, came "Bill" Merrifield, and, on their old stamping-ground along the Little Missouri, unfolded, bit by bit, the story of the four years of Roosevelt's active ranching life. In the deserted bar-room of the old "Metropolitan Hotel" at Medora (rechristened the "Rough Riders"); on the ruins of the Maltese Cross cabin and under the murmuring cottonwoods at Elkhorn, they spun their joyous yarns....