Ronald Morton, or the Fire Ships A Story of the Last Naval War 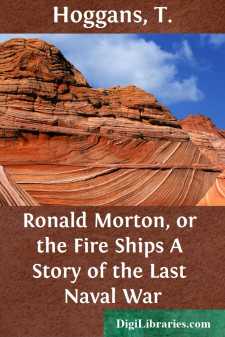 “Land! land on the larboard bow!” The cry was uttered in a foreign tongue from the masthead of a corvette of twenty guns, a beautiful long, low, flush-decked craft with dark hull, taunt raking masts, and square yards, which, under all the sails she could carry with a southerly breeze right aft, was gliding rapidly over the now smooth surface of the northern ocean. The haughty flag of old Spain, and the language spoken on board, showed that she belonged to that nation. The crew sat clustered about on the forecastle with their arms folded in a listless, inactive way—some asleep—others smoking cigarillos or playing games of chance between the guns, while a few were disputing on some trivial points with a vehemence which proved the fiery tempers hidden under those calm exteriors. The officers lolled against the bulwarks, sat on the guns, or paced slowly backwards and forwards; but rather more etiquette was kept up on the quarter deck than appeared to be the case among the men forward. The captain walked backwards and forwards with his first lieutenant on the starboard side; they crossed occasionally, and lifted their hands to their eyes to watch the land just sighted as the ship approached and glided by it at the distance of two or three miles. The captain’s appearance was in his favour. He was tall and graceful, with the clear olive-complexion, the pointed beard, the thin moustache, and the large pensive eyes, so frequently seen in portraits of high-born Spaniards. Still, though his features were handsome and very intelligent, there was an expression in them not altogether satisfactory. His companion was a short, thick-set man, dark and bearded, with a daring look in his countenance and a firmness in his month which might raise a suspicion that in cases of emergency he would be likely to take the command in the place of his superior.

“That land out there should be of some interest to us, Alvarez,” said the captain, pointing to the little conical-shaped islets the ship was passing. “It was there, so history tells us, that one of the grandees of Spain, the great Duke of Medina Sidonia, was wrecked when he sailed in command of that mighty Armada which would have assuredly crushed the power of England had it not been so completely baffled by the wonderful opposition of the elements. Many of his crew after being saved from the fury of the tempest were cruelly murdered by the barbarous inhabitants, and he and a small remnant only escaped to the main island of Shetland, whither we are bound.”

“Ah! I have heard say that the people in those parts are little better than cannibals,” answered the lieutenant; “we may as well, at all events, keep our guns run out and double-shotted while we lie here, that we may be prepared for them should they attempt to play us any tricks.”

“Oh! they are tolerably civilised now, I fancy,” answered the captain. “I myself have some Shetland blood in my veins, so I have been told, though it must be tolerably diluted by this time.”