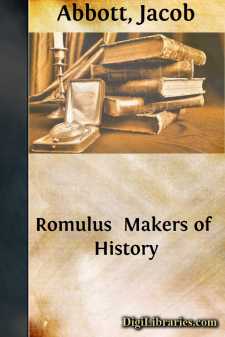 Some men are renowned in history on account of the extraordinary powers and capacities which they exhibited in the course of their career, or the intrinsic greatness of the deeds which they performed. Others, without having really achieved any thing in itself very great or wonderful, have become widely known to mankind by reason of the vast consequences which, in the subsequent course of events, resulted from their doings. Men of this latter class are conspicuous rather than great. From among thousands of other men equally exalted in character with themselves, they are brought out prominently to the notice of mankind only in consequence of the strong light reflected, by great events subsequently occurring, back upon the position where they happened to stand.

Founders of cities.Rome.Interest in respect to its origin.

The celebrity of Romulus seems to be of this latter kind. He founded a city. A thousand other men have founded cities; and in doing their work have evinced perhaps as much courage, sagacity, and mental power as Romulus displayed. The city of Romulus, however, became in the end the queen and mistress of the world. It rose to so exalted a position of influence and power, and retained its ascendency so long, that now for twenty centuries every civilized nation in the western world have felt a strong interest in every thing pertaining to its history, and have been accustomed to look back with special curiosity to the circumstances of its origin. In consequence of this it has happened that though Romulus, in his actual day, performed no very great exploits, and enjoyed no pre-eminence above the thousand other half-savage chieftains of his class, whose names have been long forgotten, and very probably while he lived never dreamed of any extended fame, yet so brilliant is the illumination which the subsequent events of history have shed upon his position and his doings, that his name and the incidents of his life have been brought out very conspicuously to view, and attract very strongly the attention of mankind.

The story of Æneas.

The history of Rome is usually made to begin with the story of Æneas. In order that the reader may understand in what light that romantic tale is to be regarded, it is necessary to premise some statements in respect to the general condition of society in ancient days, and to the nature of the strange narrations, circulated in those early periods among mankind, out of which in later ages, when the art of writing came to be introduced, learned men compiled and recorded what they termed history.

The Mediterranean sea.Italy and Greece in ancient times, and now.

The countries which formed the shores of the Mediterranean sea were as verdant and beautiful, in those ancient days, and perhaps as fruitful and as densely populated as in modern times. The same Italy and Greece were there then as now. There were the same blue and beautiful seas, the same mountains, the same picturesque and enchanting shores, the same smiling valleys, and the same serene and genial sky....