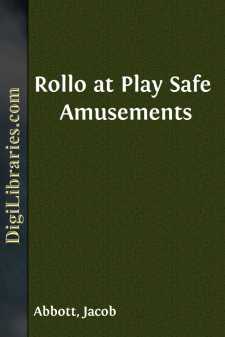 One pleasant morning in the autumn, when Rollo was about five years old, he was sitting on the platform, behind his father's house, playing. He had a hammer and nails, and some small pieces of board. He was trying to make a box. He hammered and hammered, and presently he dropped his work down and said, fretfully,

"What is the matter, Rollo?" said Jonas,—for it happened that Jonas was going by just then, with a wheelbarrow.

"I wish these little boards would not split so. I cannot make my box."

"You drive the nails wrong; you put the wedge sides with the grain."

But Jonas went on, trundling his wheelbarrow; though he looked round and told Rollo that he could not stop to explain it to him then.

Then Rollo called out,

"Jonas, Jonas, where are you going?"

"I am going down into the woods beyond the brook."

"I am going to clear up some ground."

"I should like it—but that is not for me to say."

Rollo knew by this that he must ask his mother. He went in and asked her, and she, in return, asked him if he had read his lesson that morning. He said he had not; he had forgotten it.

"Then," said his mother, "you must first go and read a quarter of an hour."

Rollo was sadly disappointed, and also a little displeased. He turned away, hung down his head, and began to cry. It is not strange that he was disappointed, but it was very wrong for him to feel displeased, and begin to cry.

Rollo came to his mother, and she said to him kindly,

"You have done wrong now twice this morning; you have neglected your duty of reading, and now you are out of humor with me because I require you to attend to it. Now it is my duty not to yield to such feelings as you have now, but to punish them. So I must say that, instead of a quarter of an hour, you must wait half an hour, before you go out with Jonas."

Rollo stood silent a minute,—he perceived that he had done wrong, and was sorry. He did not know how he could find Jonas in the woods, but he did not say any thing about that then. He only asked his mother what he must do for the half hour. She said he must read a quarter of an hour, and the rest of the time he might do as he pleased.

So Rollo took his book, and went out and sat down upon the platform, and began to read aloud. When he had finished one page, which usually took a quarter of an hour, he went in to ask his mother what time it was....