Rodman The Boatsteerer And Other Stories 1898 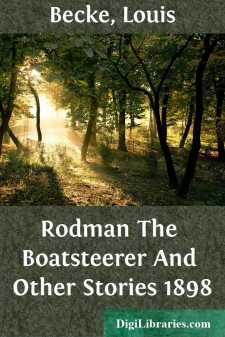 With her white cotton canvas swelling gently out and then softly drooping flat against her cordage, the Shawnee, sperm whaler of New Bedford, with the dying breath of the south-east trade, was sailing lazily over a sea whose waters were as calm as those of a mountain lake. Twenty miles astern the lofty peaks of Tutuila, one of the islands of the Samoan group, stood out clearly in the dazzling sunshine, and, almost ahead, what at dawn had been the purple loom of Upolu was changing to a cloud-capped dome of vivid green as the ship closed with the land.

The Shawnee was "a five-boat ship," and, judging from the appearance of her decks, which were very clean, an unlucky one. She had been out for over a year, and three months had passed since the last fish had been killed. That was off the coast of Chile, and she was now cruising westward and northward towards the eastern coast of New Guinea, where Captain Harvey Lucy, the master, expected to make up for the persistent ill-luck that had attended him so far. Naturally a man of most violent and ungovernable temper, his behaviour to his men on the present voyage had led to disastrous consequences, and the crew, much as they admired their captain as one of the most skilful whalemen who had ever trod a deck, were now worked up into a state of exasperation bordering on mutiny. Shortly before the Samoan Islands were sighted, the ship's cooper, a man who took the cue for his conduct to the hands from the example set by the captain, had had a fierce quarrel with a young boat-steerer, named Gerald Rodman, who, in a moment of passion, struck the cooper such a terrific blow that the man lay between life and death for some hours. An attempt to put Rodman in irons was fiercely resisted by a number of his shipmates, who were led by his younger brother. But the after-guard were too strong for the men, and after a savage conflict the two Rodmans and three other seamen were overpowered by Captain Lucy, his four mates and the carpenter and stewards. As was common enough in those days on American whaleships, nearly all the officers were relatives or connections by marriage, and were always ready to stand by the captain; in this instance the cooper was a brother of the second mate. Six days had passed since this affair had occurred, and when Upolu was sighted the five men were still in irons and confined in the hot and stifling atmosphere of the sail-locker, having been given only just enough food and water to keep body and soul together.

Four bells struck, and Captain Lucy made his appearance from below. The watch on deck, who had hitherto been talking among themselves as they went about their work, at once became silent, and muttered curses escaped from their lips as they eyed the tall figure of the captain standing at the break of the poop. For some minutes he apparently took no notice of any one about him; then he turned to the mate, who stood near him, and said:

"Have you had a look at those fellows this morning, Brant?"

"Yes," answered the officer. "They want to know if you're going to let them have a smoke."

"They can lie there till they die before any one of them shall put a pipe in his mouth."

"Just as you please, captain," said the mate, nonchalantly. "I guess you know best what you're doing. But there's going to be more trouble aboard this ship if you don't ease up a bit on those five men; and if I were you I wouldn't go too far. One of 'em—that youngest Rodman boy—can't stand much more of that sail locker in such weather as this....