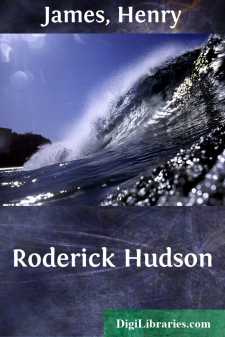 Mallet had made his arrangements to sail for Europe on the first of September, and having in the interval a fortnight to spare, he determined to spend it with his cousin Cecilia, the widow of a nephew of his father. He was urged by the reflection that an affectionate farewell might help to exonerate him from the charge of neglect frequently preferred by this lady. It was not that the young man disliked her; on the contrary, he regarded her with a tender admiration, and he had not forgotten how, when his cousin had brought her home on her marriage, he had seemed to feel the upward sweep of the empty bough from which the golden fruit had been plucked, and had then and there accepted the prospect of bachelorhood. The truth was, that, as it will be part of the entertainment of this narrative to exhibit, Rowland Mallet had an uncomfortably sensitive conscience, and that, in spite of the seeming paradox, his visits to Cecilia were rare because she and her misfortunes were often uppermost in it. Her misfortunes were three in number: first, she had lost her husband; second, she had lost her money (or the greater part of it); and third, she lived at Northampton, Massachusetts. Mallet's compassion was really wasted, because Cecilia was a very clever woman, and a most skillful counter-plotter to adversity. She had made herself a charming home, her economies were not obtrusive, and there was always a cheerful flutter in the folds of her crape. It was the consciousness of all this that puzzled Mallet whenever he felt tempted to put in his oar. He had money and he had time, but he never could decide just how to place these gifts gracefully at Cecilia's service. He no longer felt like marrying her: in these eight years that fancy had died a natural death. And yet her extreme cleverness seemed somehow to make charity difficult and patronage impossible. He would rather chop off his hand than offer her a check, a piece of useful furniture, or a black silk dress; and yet there was some sadness in seeing such a bright, proud woman living in such a small, dull way. Cecilia had, moreover, a turn for sarcasm, and her smile, which was her pretty feature, was never so pretty as when her sprightly phrase had a lurking scratch in it. Rowland remembered that, for him, she was all smiles, and suspected, awkwardly, that he ministered not a little to her sense of the irony of things. And in truth, with his means, his leisure, and his opportunities, what had he done? He had an unaffected suspicion of his uselessness. Cecilia, meanwhile, cut out her own dresses, and was personally giving her little girl the education of a princess.

This time, however, he presented himself bravely enough; for in the way of activity it was something definite, at least, to be going to Europe and to be meaning to spend the winter in Rome. Cecilia met him in the early dusk at the gate of her little garden, amid a studied combination of floral perfumes. A rosy widow of twenty-eight, half cousin, half hostess, doing the honors of an odorous cottage on a midsummer evening, was a phenomenon to which the young man's imagination was able to do ample justice....