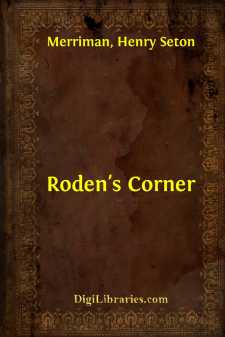 CHAPTER I. IN ST. JACOB STRAAT.

"The Tree of Knowledge is not that of Life."

"It is the Professor von Holzen," said a stout woman who still keeps the egg and butter shop at the corner of St. Jacob Straat in The Hague; she is a Jewess, as, indeed, are most of the denizens of St. Jacob Straat and its neighbour, Bezem Straat, where the fruit-sellers live—"it is the Professor von Holzen, who passes this way once or twice a week. He is a good man."

"His coat is of a good cloth," answered her customer, a young man with a melancholy dark eye and a racial appreciation of the material things of this world.

Some say that it is not wise to pass through St. Jacob Straat or Bezem Straat alone and after nightfall, for there are lurking forms within the doorways, and shuffling feet may be heard in the many passages. During the daytime the passer-by will, if he looks up quickly enough, see furtive faces at the windows, of men, and more especially of women, who never seem to come abroad, but pass their lives behind those unwashed curtains, with carefully closed windows, and in an atmosphere which may be faintly imagined by a glance at the wares in the shop below. The pavement of St. Jacob Straat is also pressed into the service of that commerce in old metal and damaged domestic utensils which seems to enable thousands of the accursed people to live and thrive according to their lights. It will be observed that the vendors, with a knowledge of human nature doubtless bred of experience, only expose upon the pavement articles such as bedsteads, stoves, and other heavy ware which may not be snatched up by the fleet of foot. Within the shops are crowded clothes and books and a thousand miscellaneous effects of small value. A hush seems to hang over this street. Even the children, white-faced and melancholy, with deep expressionless eyes and drooping noses, seem to have realized too soon the gravity of life, and rarely indulge in games.

He whom the butter-merchant described as Professor von Holzen passed quickly along the middle of the street, with an air suggesting a desire to attract as little attention as possible. He was a heavy-shouldered man with a bad mouth—a greedy mouth, one would think—and mild eyes. The month was September, and the professor wore a thin black overcoat closely buttoned across his broad chest. He carried a pair of slate-coloured gloves and an umbrella. His whole appearance bespoke learning and middle-class respectability. It is, after all, no use being learned without looking learned, and Professor von Holzen took care to dress according to his station in life. His attitude towards the world seemed to say, "Leave me alone and I will not trouble you," which is, after all, as satisfactory an attitude as may be desired. It is, at all events, better than the common attitude of the many, that says, "Let us exchange confidences," leading to the barter of two valueless commodities.

The professor stopped at the door of No. 15, St. Jacob Straat—one of the oldest houses in this old street—and slowly lighted a cigar....