Rod of the Lone Patrol 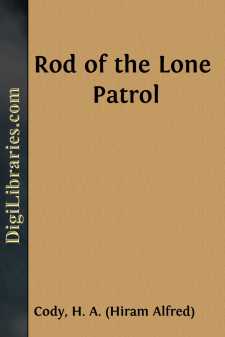 CHAPTER I A WAIF OF THE NIGHT

Parson Dan chuckled several times as he sipped his hot cocoa before the fire. It was an open fire, and the flames licked around an old dry root which had been brought with other driftwood up from the shore. This brightly-lighted room was a pleasing contrast to the roughness of the night outside, for a strong late October wind was careening over the land. It swirled about the snug Hillcrest rectory, rattling any window which happened to be a little loose, and drawing the forked-tongued flames writhing up the large commodious chimney.

When the third chuckle had been emitted, Mrs. Royal laid aside the paper she had been reading and looked somewhat curiously at her husband.

"The missionary meeting must have been very amusing to-night, Daniel," she remarked. "It is too bad that I didn't go."

"Oh, no, it wasn't the meeting which was amusing," was the reply. "But I must say it was the best one I ever attended. That missionary had a great story to tell and he told it well. There was a good attendance, too, especially for such a cold night. But you can't guess, my dear, who was there."

"No, no," and the parson rubbed his hands in glee and gave another boyish chuckle. "Give it up, eh?" and his eyes sparkled as he turned them upon his wife's puzzled face.

"I thought so. You could never guess, for you would never think ofCaptain Josh."

"No, surely not, Daniel!" and Mrs. Royal, now all attention, drew her chair a little closer to the fire. "What in the world took him there to-night? I never knew him to go to church, let alone to a missionary meeting."

"Oh, that is easily explained, dear. His only son, you know, is in the Yukon, and he was anxious to hear about that country. He was certainly the most interested person there, and after the meeting was over, he walked right up to Mr. Dicer and asked him if he had met his son."

"And had he?" Mrs. Royal inquired.

"Yes; knew him well. Now, the way those two men did talk would have done your heart good. To think of Captain Josh chatting with a missionary, when for years he has been so much down on missions and missionaries. That is one on the old captain, and I shall not forget it when I see him again, ho, ho," and Parson Dan leaned back in his comfortable chair and fairly shook with merriment.

"I hope that his interest will keep up," was Mrs. Royal's comment, as she picked up the paper she had laid aside. "Perhaps he will learn that missionaries are of some use in the world after all."

"I am afraid not, Martha," the parson returned, as he reached for his pipe and tobacco lying on a little stand by his side. "It is only his son which made him interested to-night, and that is as far as it goes."

"It might be the beginning, though, Daniel, who can tell? I always liked Jimmy. He and Alec got on so well together. Do you know what day this is?"

"Ay, ay, Martha," and the clergyman's face grew grave, and a slight mistiness dimmed his eyes. "I haven't forgotten it."

"He would have been twenty-five to-day, Daniel."

"I know it, and it seems only yesterday that I went for old Doctor Paddock....