Robert Louis Stevenson: a record, an estimate, and a memorial 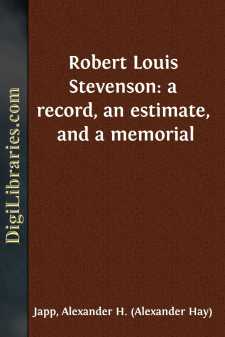 My little effort to make Thoreau better known in England had one result that I am pleased to think of.  It brought me into personal association with R. L. Stevenson, who had written and published in The Cornhill Magazine an essay on Thoreau, in whom he had for some time taken an interest.  He found in Thoreau not only a rare character for originality, courage, and indefatigable independence, but also a master of style, to whom, on this account, as much as any, he was inclined to play the part of the “sedulous ape,” as he had acknowledged doing to many others—a later exercise, perhaps in some ways as fruitful as any that had gone before.  A recent poet, having had some seeds of plants sent to him from Northern Scotland to the South, celebrated his setting of them beside those native to the Surrey slope on which he dwelt, with the lines—

“And when the Northern seeds are growing,Another beauty then bestowing,We shall be fine, and North to SouthBe giving kisses, mouth to mouth.”

So the Thoreau influence on Stevenson was as if a tart American wild-apple had been grafted on an English pippin, and produced a wholly new kind with the flavours of both; and here wild America and England kissed each other mouth to mouth.

The direct result was the essay in The Cornhill, but the indirect results were many and less easily assessed, as Stevenson himself, as we shall see, was ever ready to admit.  The essay on Thoreau was written in America, which further, perhaps, bears out my point.

One of the authorities, quoted by Mr Hammerton, in Stevensoniana says of the circumstances in which he found our author, when he was busily engaged on that bit of work:

“I have visited him in a lonely lodging in California, it was previous to his happy marriage, and found him submerged in billows of bed-clothes; about him floated the scattered volumes of a complete set of Thoreau; he was preparing an essay on that worthy, and he looked at the moment like a half-drowned man, yet he was not cast down.  His work, an endless task, was better than a straw to him.  It was to become his life-preserver and to prolong his years.  I feel convinced that without it he must have surrendered long since.  I found Stevenson a man of the frailest physique, though most unaccountably tenacious of life; a man whose pen was indefatigable, whose brain was never at rest, who, as far as I am able to judge, looked upon everybody and everything from a supremely intellectual point of view.”

We remember the common belief in Yorkshire and other parts that a man could not die so long as he could stand up—a belief on which poor Branwell Brontë was fain to act and to illustrate, but R. L. Stevenson illustrated it, as this writer shows, in a better, calmer, and healthier way, despite his lack of health.

On some little points of fact, however, Stevenson was wrong; and I wrote to the Editor of The Spectator a letter, titled, I think, “Thoreau’s Pity and Humour,” which he inserted.  This brought me a private letter from Stevenson, who expressed the wish to see me, and have some talk with me on that and other matters.  To this letter I at once replied, directing to 17 Heriot Row, Edinburgh, saying that, as I was soon to be in that City, it might be possible for me to see him there.  In reply to this letter Mr Stevenson wrote:

“The Cottage, Castleton of Braemar,Sunday, August (?...