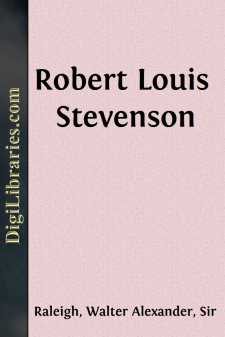 When a popular writer dies, the question it has become the fashion with a nervous generation to ask is the question, ‘Will he live?’  There was no idler question, none more hopelessly impossible and unprofitable to answer.  It is one of the many vanities of criticism to promise immortality to the authors that it praises, to patronise a writer with the assurance that our great-grandchildren, whose time and tastes are thus frivolously mortgaged, will read his works with delight.  But ‘there is no antidote against the opium of time, which temporally considereth all things: our fathers find their graves in our short memories, and sadly tell us how we may be buried in our survivors.’  Let us make sure that our sons will care for Homer before we pledge a more distant generation to a newer cult.

Nevertheless, without handling the prickly question of literary immortality, it is easy to recognise that the literary reputation of Robert Louis Stevenson is made of good stuff.  His fame has spread, as lasting fame is wont to do, from the few to the many.  Fifteen years ago his essays and fanciful books of travel were treasured by a small and discerning company of admirers; long before he chanced to fell the British public with Treasure Island and Dr. Jekyll and Mr. Hyde he had shown himself a delicate marksman.  And although large editions are nothing, standard editions, richly furnished and complete, are worthy of remark.  Stevenson is one of the very few authors in our literary history who have been honoured during their lifetime by the appearance of such an edition; the best of his public, it would seem, do not only wish to read his works, but to possess them, and all of them, at the cost of many pounds, in library form.  It would be easy to mention more voluminous and more popular authors than Stevenson whose publishers could not find five subscribers for an adventure like this.  He has made a brave beginning in that race against Time which all must lose.

It is not in the least necessary, after all, to fortify ourselves with the presumed consent of our poor descendants, who may have a world of other business to attend to, in order to establish Stevenson in the position of a great writer.  Let us leave that foolish trick to the politicians, who never claim that they are right—merely that they will win at the next elections.  Literary criticism has standards other than the suffrage; it is possible enough to say something of the literary quality of a work that appeared yesterday.  Stevenson himself was singularly free from the vanity of fame; ‘the best artist,’ he says truly, ‘is not the man who fixes his eye on posterity, but the one who loves the practice of his art.’  He loved, if ever man did, the practice of his art; and those who find meat and drink in the delight of watching and appreciating the skilful practice of the literary art, will abandon themselves to the enjoyment of his masterstrokes without teasing their unborn and possibly illiterate posterity to answer solemn questions.  Will a book live?  Will a cricket match live?  Perhaps not, and yet both be fine achievements....