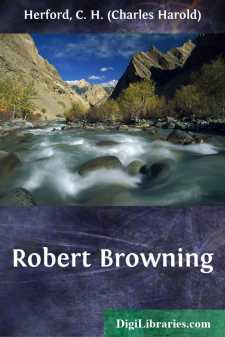 The Boy sprang up ... and ran,Stung by the splendour of a sudden thought.— A Death in the Desert.

Judged by his cosmopolitan sympathies and his encyclopædic knowledge, by the scenery and the persons among whom his poetry habitually moves, Browning was one of the least insular of English poets. But he was also, of them all, one of the most obviously and unmistakably English. Tennyson, the poetic mouthpiece of a rather specific and exclusive Anglo-Saxondom, belonged by his Vergilian instincts of style to that main current of European poetry which finds response and recognition among cultivated persons of all nationalities; and he enjoyed a European distinction not attained by any other English poet since Byron. Browning, on the contrary, with his long and brilliant gallery of European creations, Browning, who claimed Italy as his "university," remains, as a poet, all but unknown even in Italy, and all but non-existent for the rest of the civilised world beyond the Channel. His cosmopolitan sympathies worked through the medium of a singularly individual intellect; and the detaching and isolating effect which pronounced individuality of thinking usually produces, even in a genial temperament, was heightened in his case by a robust indifference to conventions of all kinds, and not least to those which make genius easily intelligible to the plain man.

What is known of Browning's descent makes these contrasts in some degree intelligible. An old strain of Wessex squires or yeomen, dimly discernible in the sixteenth and seventeenth centuries, issued, about the middle of the eighteenth, in the first distinct personality among the poet's forebears, his grandfather, who also bore the name Robert. He was a robust, hard-headed, energetic, pushing man of business and the world, who made his way from a clerkship to an important and responsible post in the Bank of England, and settled accounts with religion and with literature in a right English way, by reading the Bible and 'Tom Jones' through every year, and very little else. More problematical and elusive is the figure of his first wife, Margaret Tittle, with whom, to judge from the character of her eldest son, literary and artistic sensibility first mingled in the hard practical Browning stock. In this second Robert Browning, indeed, the somewhat brutal and grasping egotism of the father gave place to a cultured humanity of almost feminine tenderness and charm. All his life long he was passionately devoted to literature, to art, to children. He collected rare books and prints with avidity, but was no less generous in giving them away. Indifferent to money, he hated to see a scrap of paper wasted. He had a neat touch in epigrams, and a boyish delight in grotesque rhymes. But there was no lack of grit in this accomplished, fresh-minded, and lovable man. He had the tough fibre of his race; only it was the wrongs of others that called out its tenacity, not his own....