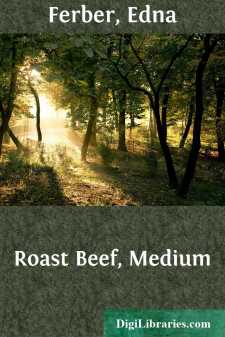 There is a journey compared to which the travels of Bunyan's hero were a summer-evening's stroll. The Pilgrims by whom this forced march is taken belong to a maligned fraternity, and are known as traveling men. Sample-case in hand, trunk key in pocket, cigar in mouth, brown derby atilt at an angle of ninety, each young and untried traveler starts on his journey down that road which leads through morasses of chicken a la Creole, over greasy mountains of queen fritters made doubly perilous by slippery glaciers of rum sauce, into formidable jungles of breaded veal chops threaded by sanguine and deadly streams of tomato gravy, past sluggish mires of dreadful things en casserole, over hills of corned-beef hash, across shaking quagmires of veal glace, plunging into sloughs of slaw, until, haggard, weary, digestion shattered, complexion gone, he reaches the safe haven of roast beef, medium. Once there, he never again strays, although the pompadoured, white-aproned siren sing-songs in his ear the praises of Irish stew, and pork with apple sauce.

Emma McChesney was eating her solitary supper at the Berger house at Three Rivers, Michigan. She had arrived at the Roast Beef haven many years before. She knew the digestive perils of a small town hotel dining-room as a guide on the snow-covered mountain knows each treacherous pitfall and chasm. Ten years on the road had taught her to recognize the deadly snare that lurks in the seemingly calm bosom of minced chicken with cream sauce. Not for her the impenetrable mysteries of a hamburger and onions. It had been a struggle, brief but terrible, from which Emma McChesney had emerged triumphant, her complexion and figure saved.

No more metaphor. On with the story, which left Emma at her safe and solitary supper.

She had the last number of the Dry Goods Review propped up against the vinegar cruet and the Worcestershire, and the salt shaker. Between conscientious, but disinterested mouthfuls of medium roast beef, she was reading the snappy ad set forth by her firm's bitterest competitors, the Strauss Sans-silk Skirt Company. It was a good reading ad. Emma McChesney, who had forgotten more about petticoats than the average skirt salesman ever knew, presently allowed her luke- warm beef to grow cold and flabby as she read. Somewhere in her subconscious mind she realized that the lanky head waitress had placed some one opposite her at the table. Also, subconsciously, she heard him order liver and bacon, with onions. She told herself that as soon as she reached the bottom of the column she'd look up to see who the fool was. She never arrived at the column's end.

"I just hate to tear you away from that love lyric; but if I might trouble you for the vinegar—"

Emma groped for it back of her paper and shoved it across the table without looking up. "—and the Worcester—"

One eye on the absorbing column, she passed the tall bottle. But at its removal her prop was gone. The Dry Goods Review was too weighty for the salt shaker alone....