Right on the Scaffold, or The Martyrs of 1822 The American Negro Academy. Occasional Papers No. 7 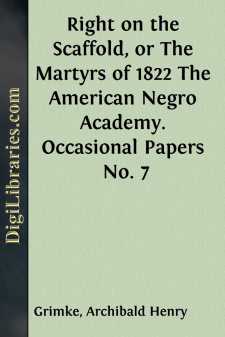 He was black but comely. Nature gave him a royal body, nobly planned and proportioned, and noted for its great strength. There was that in his countenance, which bespoke a mind within to match that body, a mind of uncommon native intelligence, force of will, and capacity to dominate others. His manners were at once abrupt and crafty, his temper was imperious, his passions and impulses were those of a primitive ruler, and his heart was the heart of a lion. He was often referred to as an old man, but he was not an old man, when he died on a gallows at Charleston, S. C., July 2, 1822. No, he was by no means an old man, whether judged by length of years or strength of body, for he was on that memorable July day, seventy-eight years ago, not more than fifty-six years old, although the hair on his head and face was then probably white. This circumstance and the pre-eminence accorded him by his race neighbors, might account for the references to him, as to that of an old man.

All things considered, he was truly an extraordinary man. It is impossible to say where he was born, or who were his parents. He was, alas! as far as my knowledge of his personal history goes, a man without a past. He might have been born of slave parentage in the West Indies, or of royal ones in Africa, where, in that case, he was kidnapped and sold subsequently into slavery in America. I had almost said that he was a man without a name. He is certainly a man without ancestral name. For the name to which he answered up to the age of fourteen, has been lost forever. After that time he has been known as Denmark Vesey. Denmark is a corruption of Telemaque, the praenomen bestowed upon him at that age by a new master, and Vesey was the cognomen of that master who was captain of an American vessel, engaged in the African slave trade between the islands of St. Thomas and Sto. Domingo. It is on board of Captain Vesey’s slave vessel that we catch the earliest glimpse of our hero. Deeply interesting moment is that, which revealed thus to us the Negro lad, deeply interesting and tragical for one and the same cause.

This first appearance of him upon the stage of history occurred in the year which ended virtually the war for American Independence, 1781, during the passage between St. Thomas and Cap Francais, of Captain Vesey’s slave bark with a cargo of 390 slaves. The lad, Telemaque, was a part of that sad cargo, undistinguished at the outset of the voyage from the rest of the human freight. Of the 389 others, we know absolutely nothing. Not an incident, nor a token, not even a name has floated to us across the intervening years, from all that multitudinous misery, from such an unspeakable tragedy, except that the ship reached its destination, and the slaves were sold. Like boats that pass at sea, that slave vessel loomed for a lurid instant on the horizon, and was gone forever—all but Denmark Vesey. How it happened that he did not vanish with the rest of his ill-fated fellows, will be set down in this paper, which has essayed to describe the slave plot which he planned, with which his name is identified, and by which it ought to be, for all time, hallowed in the memory of every man, woman and child of Negro descent in America....