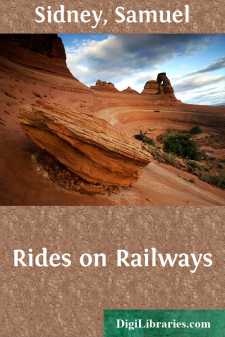 According to Mr. Punch, one of the greatest authorities of the day on all such subjects, the nearest way to Euston Station is to take a cab; but those who are not in a hurry may take advantage of the omnibuses that start from Gracechurch Street and Charing Cross, traversing the principal thoroughfares and calling at the George and Blue Boar, Holborn, the Green Man and Still, Oxford Street, and the Booking Offices in Regent Circus.

Euston, including its dependency, Camden Station, is the greatest railway port in England, or indeed in the world.  It is the principal gate through which flows and reflows the traffic of a line which has cost more than twenty-two millions sterling; which annually earns more than two millions and a-half for the conveyance of passengers, and merchandise, and live stock; and which directly employs more than ten thousand servants, beside the tens of thousands to whom, in mills or mines, in ironworks, in steam-boats and coasters, it gives indirect employment.  What London is to the world, Euston is to Great Britain: there is no part of the country to which railway communication has extended, with the exception of the Dover and Southampton lines, which may not be reached by railway conveyance from Euston station.

The Buckinghamshire lines from Bletchley open the way through Oxford to all the Western counties, only interrupted by the break of gauge.  The Northampton and Peterborough, from Blisworth, proceeds to the Eastern coast of Norfolk and Lincoln.  At Rugby commences one of several roads to the North, either by Leicester, Nottingham, and Lincoln, or by Derby and Sheffield; and at Rugby, too, we may either proceed to Stafford by the direct route of the Trent Valley, a line which is rendered classical by the memory of Sir Robert Peel, who turned its first sod with a silver spade and honoured its opening by a celebrated speech; or we may select the old original line through Coventry, Birmingham, and Wolverhampton, passing through a network of little railways leading to Warwick and Leamington, the result of unprofitable competition.  A continuation of the Trent Valley line intersects the Pottery district, where the cheapest Delft and the most exquisite specimens of China ware are produced with equal success; and thus we reach Liverpool and Manchester by the straightest possible line.

At Stafford we can turn off to Shrewsbury and Chester, or again following the original route arrive at Crewe, the great workshop and railway town of the London and North Western.  Crewe affords an ample choice of routes—1st, to Leeds by Stockport (with a branch to Macclesfield) and Huddersfield, or from Leeds to York, or to Harrogate, and so on by the East Coast line through Durham, Newcastle, and Berwick, to Edinburgh; 2dly, direct to Manchester; 3rdly, to Warrington, Newton, Wigan, and the North, through the salt mining country; and, 4thly, to Chester.  At Chester we may either push on to Ireland by way of the Holyhead Railway, crossing the famous Britannia Tubular Bridge, or to Birkenhead, the future rival of Liverpool....