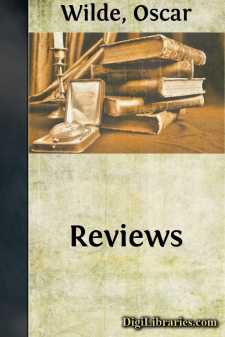 The editor of writings by any author not long deceased is censured sooner or later for his errors of omission or commission.  I have decided to err on the side of commission and to include in the uniform edition of Wilde’s works everything that could be identified as genuine.  Wilde’s literary reputation has survived so much that I think it proof against any exhumation of articles which he or his admirers would have preferred to forget.  As a matter of fact, I believe this volume will prove of unusual interest; some of the reviews are curiously prophetic; some are, of course, biassed by prejudice hostile or friendly; others are conceived in the author’s wittiest and happiest vein; only a few are colourless.  And if, according to Lord Beaconsfield, the verdict of a continental nation may be regarded as that of posterity, Wilde is a much greater force in our literature than even friendly contemporaries ever supposed he would become.

It should be remembered, however, that at the time when most of these reviews were written Wilde had published scarcely any of the works by which his name has become famous in Europe, though the protagonist of the æsthetic movement was a well-known figure in Paris and London.  Later he was recognised—it would be truer to say he was ignored—as a young man who had never fulfilled the high promise of a distinguished university career although his volume of Poems had reached its fifth edition, an unusual event in those days.  He had alienated a great many of his Oxford contemporaries by his extravagant manner of dress and his methods of courting publicity.  The great men of the previous generation, Wilde’s intellectual peers, with whom he was in artistic sympathy, looked on him askance.  Ruskin was disappointed with his former pupil, and Pater did not hesitate to express disapprobation to private friends; while he accepted incense from a disciple, he distrusted the thurifer.

From a large private correspondence in my possession I gather that it was, oddly enough, in political and social centres that Wilde’s amazing powers were rightly appreciated and where he was welcomed as the most brilliant of living talkers.  Before he had published anything except his Poems, the literary dovecots regarded him with dislike, and when he began to publish essays and fairy stories, the attitude was not changed; it was merely emphasised in the public press.  His first dramatic success at the St. James’s Theatre gave Wilde, of course, a different position, and the dislike became qualified with envy.  Some of the younger men indeed were dazzled, but with few exceptions their appreciation was expressed in an unfortunate manner.  It is a consolation or a misfortune that the wrong kind of people are too often correct in their prognostications of the future; the far-seeing are also the foolish.

From these reviews which illustrate the middle period of Wilde’s meteoric career, between the æsthetic period and the production of Lady Windermere’s Fan, we learn his opinion of the contemporaries who thought little enough of him.  That he revised many of these opinions, notably those that are harsh, I need scarcely say; and after his release from prison he lost much of his admiration for certain writers.  I would draw special attention to those reviews of Mr....