Reveries over Childhood and Youth 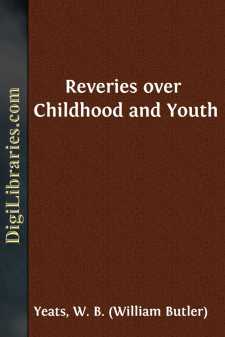 REVERIES OVER CHILDHOOD AND YOUTH

y first memories are fragmentary and isolated and contemporaneous, as though one remembered vaguely some early day of the Seven Days. It seems as if time had not yet been created, for all are connected with emotion and place and without sequence.

I remember sitting upon somebody’s knee, looking out of a window at a wall covered with cracked and falling plaster, but what wall I do not remember, and being told that some relation once lived there. I am looking out of another window in London. It is at Fitzroy Road. Some boys are playing in the road and among them a boy in uniform, a telegraph boy perhaps. When I ask who the boy is, a servant tells me that he is going to blow the town up, and I go to sleep in terror.

After that come memories of Sligo, where I live with my grandparents. I am sitting on the ground looking at a mastless toy boat, with the paint rubbed and scratched, and I say to myself in great melancholy, “it is further away than it used to be,” and while I am saying it I am looking at a long scratch in the stern, for it is especially the scratch which is further away. Then one day at dinner my great-uncle William Middleton says, “we should not make light of the troubles of children. They are worse than ours, because we can see the end of our trouble and they can never see any end,” and I feel grateful for I know that I am very unhappy and have often said to myself, “when you grow up, never talk as grown-up people do of the happiness of childhood.” I may have already had the night of misery when, having prayed for several days that I might die, I had begun to be afraid that I was dying and prayed that I might live. There was no reason for my unhappiness. Nobody was unkind, and my grandmother has still after so many years my gratitude and my reverence. The house was so big that there was always a room to hide in, and I had a red pony and a garden where I could wander, and there were two dogs to follow at my heels, one white with some black spots on his head and the other with long black hair all over him. I used to think about God and fancy that I was very wicked, and one day when I threw a stone and hit a duck in the yard by mischance and broke its wing, I was full of wonder when I was told that the duck would be cooked for dinner and that I should not be punished.

Some of my misery was loneliness and some of it fear of old William Pollexfen my grandfather. He was never unkind, and I cannot remember that he ever spoke harshly to me, but it was the custom to fear and admire him. He had won the freedom of some Spanish city for saving life, but was so silent that his wife never knew it till he was near eighty, and then from the chance visit of some old sailor. She asked him if it was true and he said it was true, but she knew him too well to question and his old shipmate had left the town. She too had the habit of fear. We knew that he had been in many parts of the world, for there was a great scar on his hand made by a whaling-hook, and in the dining-room was a cabinet with bits of coral in it and a jar of water from the Jordan for the baptising of his children and Chinese pictures upon rice-paper and an ivory walking-stick from India that came to me after his death....